Loud, Catchy Campaign Songs In Yogi Adityanath vs Akhilesh Yadav In UP 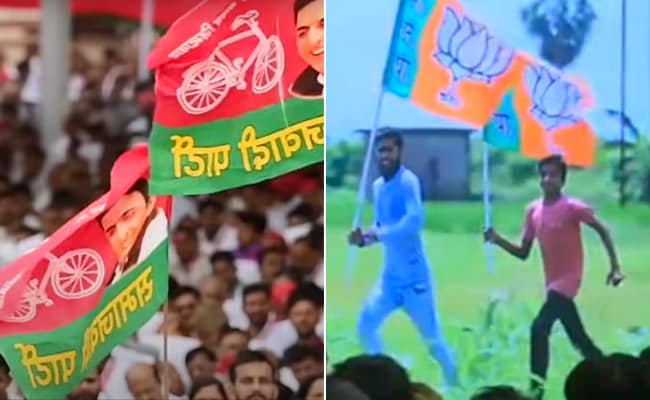 Political parties have released catchy campaign songs to win voters in Uttar Pradesh, where elections are just weeks away. The country's most populous state will see a big fight between the ruling BJP and the Samajwadi Party, while the Congress and other smaller parties are also looking for respectable slice of the power pie.

Chief Minister Yogi Adityanath launched the BJP's election song today. At a party event held with much fanfare, a giant projector screen ran a song that opened with visuals of the Ram temple in Ayodhya.

A montage of visuals themed on development including one in which Prime Minister Narendra Modi and Yogi Adityanath are seen in a metro train follow. There is heavy drumbeat throughout the short song.

The Samajwadi Party, led by former UP Chief Minister Akhilesh Yadav, however, was a bit early - by some eight months - in releasing its campaign song.

Back in June 2021, Mr Yadav's party released a campaign video that targeted the UP government's handling of the COVID-19 pandemic's second wave.

A major part of the video publicised schemes launched by Mr Yadav when he was Chief Minister between 2012 and 2017.

After launching the BJP song titled "UP Phir Mangein BJP Sarkar (UP wants BJP government again)" today, Yogi Adityanath said, "The rioters who were once a threat to peace and harmony of the state and enjoyed patronage of previous governments, today have their posters pasted on roads and crossings."

The Chief Minister's swipe appeared to be directed at Mr Yadav's party that the BJP has often termed a party of goons.

"Taking the basic mantra of 'Sabka Saath, Sabka Vikas' of Prime Minister Narendra Modi as the aim of our government, we have worked for the development of all but appeasement of none," Yogi Adityanath said.

UP will vote in seven phases from February 10. Counting is on March 10.