Aggregates of exit polls for 2018 assembly elections showed the BJP falling short of a majority in Madhya Pradesh and Chhattisgarh while the Congress is seen winning Rajasthan.

Exit polls for five states in elections, billed as the semi-final before next year's general elections, predict a worrying outcome for the BJP in three heartland states, Madhya Pradesh, Chhattisgarh and Rajasthan. An aggregate of exit polls shows the BJP's winning streak is set to end in Madhya Pradesh and Chhattisgarh, both heading for hung verdict.

The Congress is tipped to win a clear majority in Rajasthan. The party is likely to lose Mizoram and K Chandrashekar Rao will retain Telangana, the exit polls say. 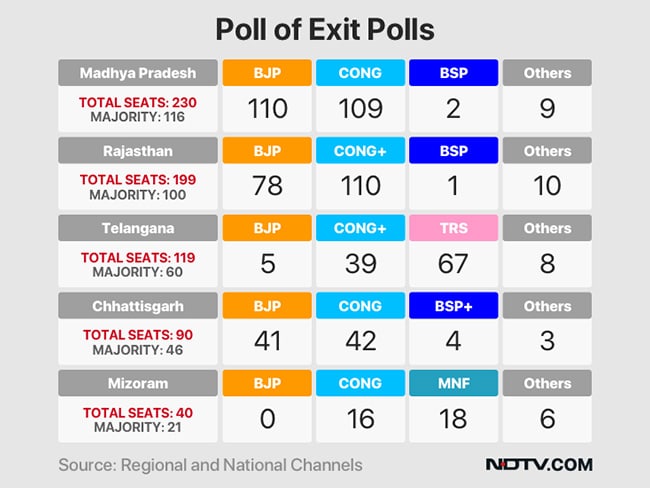 For Madhya Pradesh, exit polls see both BJP and Congress going neck and neck but falling short of a clear majority in the 230-member assembly. According to an aggregate of nine exit polls, the BJP will get 110 seats in the state, while the Congress will get 109 seats. The halfway mark is at 115. Mayawati's Bahujan Samaj Party will get 2 seats. 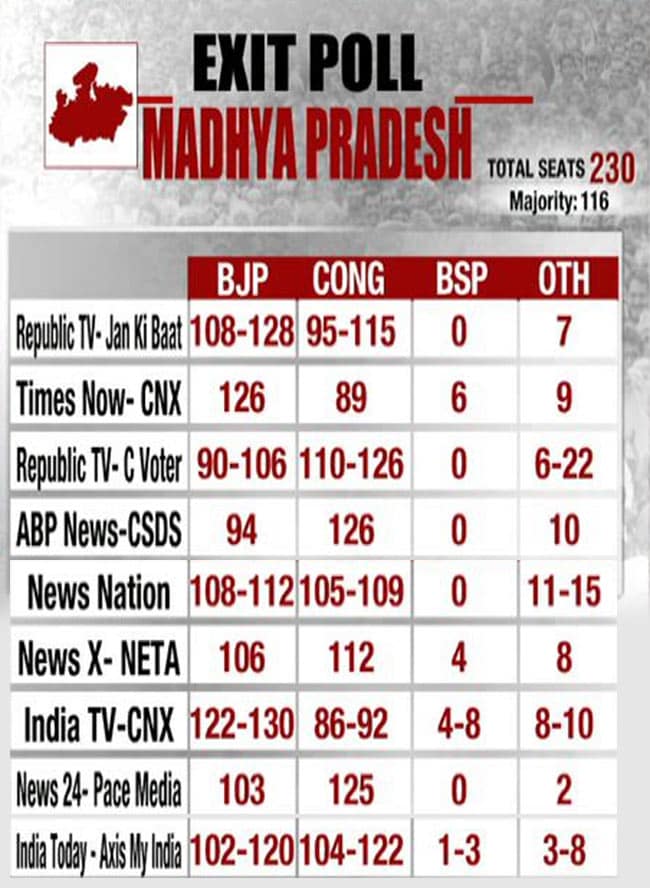 In Chhattisgarh too, the BJP might have cause to worry, if the exit polls are to be believed. The BJP, led by Chief Minister Raman Singh, will get 41 of the state's 90 seats, while the Congress will win 42. The Ajit Jogi-Mayawati alliance will get 4 seats, the aggregate of nine exit polls shows. The majority mark in the 90-member assembly lies at 46. 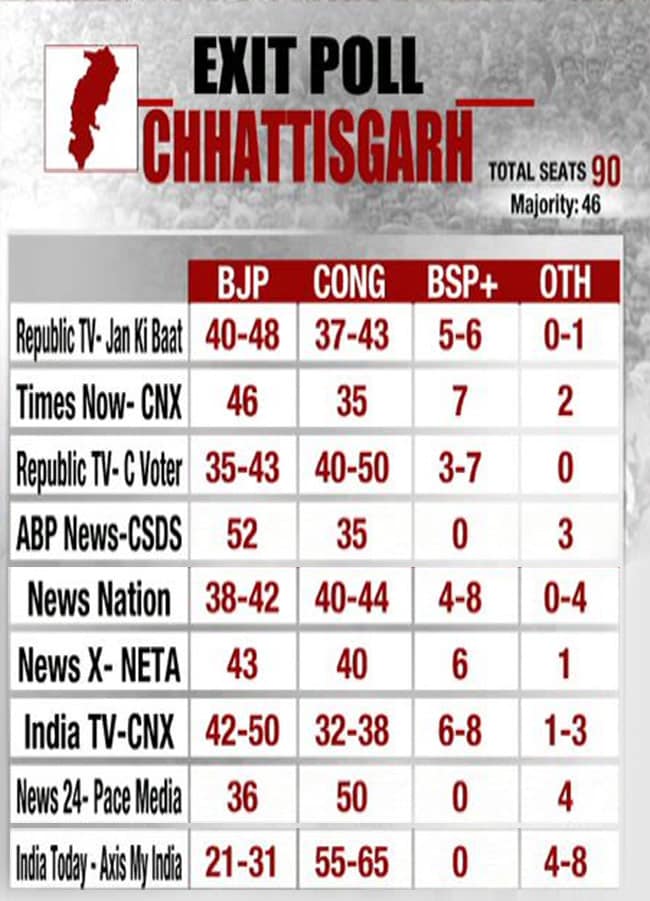 Rajasthan, which has not voted for the same party for two consecutive terms in the last 20 years, will this time pick the Congress, continuing the trend, according to the poll of exit polls. In the 200-member assembly, the BJP will win 78 seats and the Congress 110 seats, an aggregate of 10 exit polls have predicted. 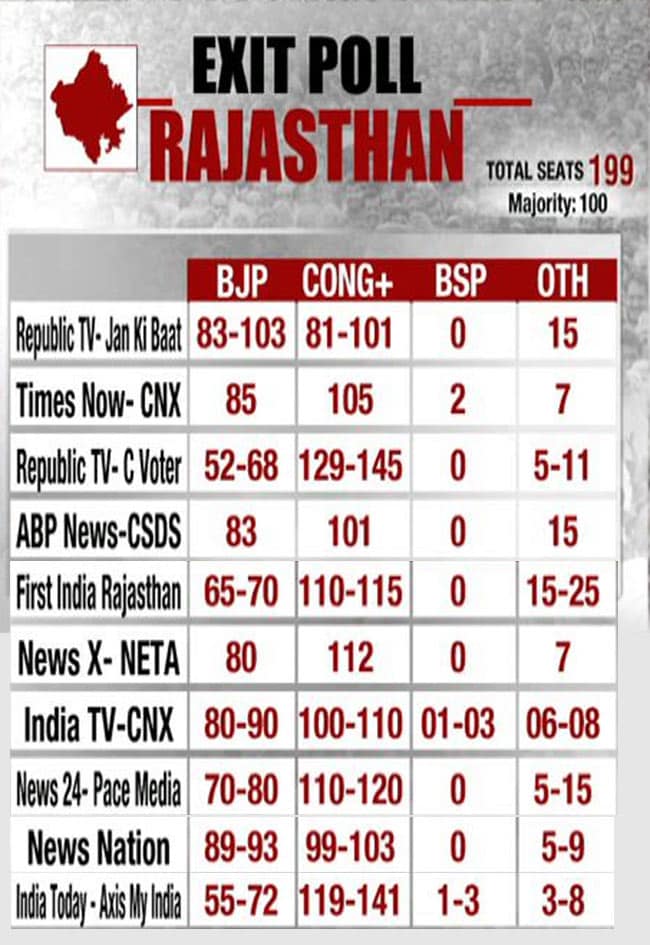 In Telangana, India's youngest state which voted for the second time on Friday, exit polls show Telangana Rashtra Samithi chief K Chandrashekar Rao's gamble of dissolving the state assembly eight months before schedule paying off. The TRS will get 67 of the state's 119 assembly seats, where the majority mark is at 61. The Congress-Chandrababu Naidu combine will get 39 seats and the BJP five seats, an aggregate of 11 exit polls have predicted. 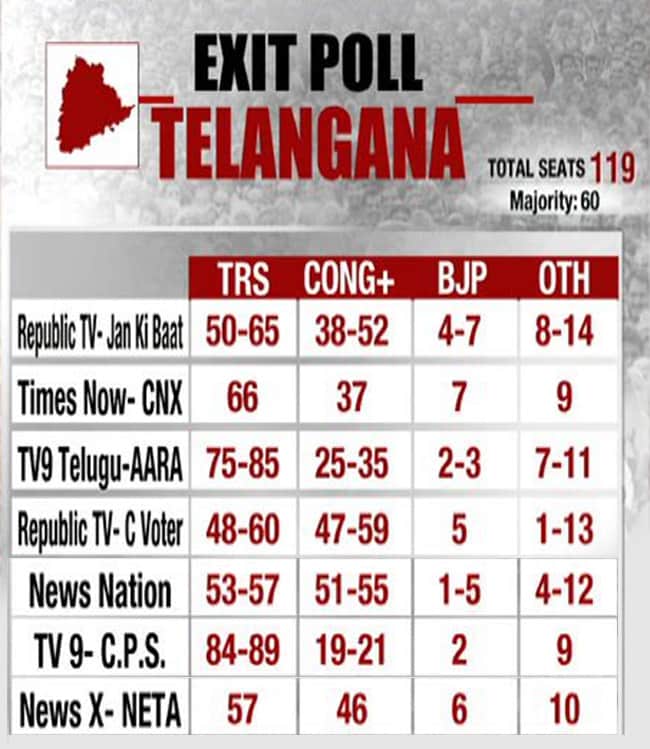 Mizoram, one of the four states where the Congress is still in power, will vote out the Congress but end up with a split verdict, predict exit polls in the state. The aggregate of three exit polls shows the Congress getting only 16 seats in the 40-member assembly. The MNF, it predicts, will get 18 seats. The BJP, the exit polls predict, will have to wait longer to open its account in the state and ruling the entire northeast. 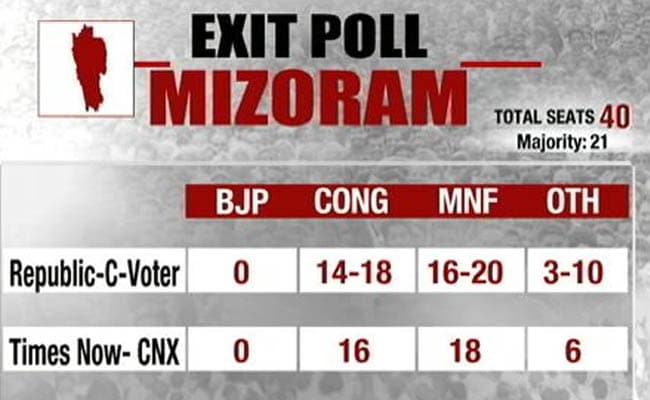 The exit polls came in as polling ended in Rajasthan and Telangana at 5 pm. Chhattisgarh voted in two phases on November 12 and November 20, Madhya Pradesh and Mizoram voted on November 28.

Telangana witnessed a three-cornered battle with the TRS taking on the BJP and a grand alliance led by the Congress and Chandrababu Naidu's Telugu Desam Party. While KCR's party won 63 seats last time against the 21 seats of Congress and 15 of Chandrababu Naidu's Telugu Desam Party, data from the last election shows a 2 per cent vote swing may change the outcome of the election. Mr Rao had a good equation with Asaduddin Owaisi's AIMIM, which won seven seats in the last election.

In the last five elections since 1993, Rajasthan has swung between the BJP and the Congress. The Congress claims there is huge anti-incumbency in the state. In the last round of by-elections in February, the party wrested the Ajmer and Alwar Lok Sabha seats and the Mandalgarh Assembly seat from the BJP.

In the heartland state of Madhya Pradesh, the Congress is hoping to unseat the BJP, which has been in power for the last 15 years. The state recorded a voter turnout of over 74 per cent, higher than what it did in last elections in 2013. The Congress is counting on anti-incumbency to sweep it back to power.

Chhattisgarh, the only state to have voted in two phases, witnessed a three-way battle for the first time with the ruling BJP trying to wrestle it out with the opposition Congress and the Ajit Jogi-Mayawati-led alliance emerging as a formidable third front. Mr Jogi - who ruled Chhattisgarh for the first three years as a Congress Chief Minister, later floated his own outfit and aligned with the Bahujan Samaj Party and the Communist Party of India - is seen as a possible kingmaker in a state where the vote share difference between the BJP and the Congress was less than one per cent in 2013.

While the main opposition in Mizoram - the Mizo National Front (MNF) - is optimistic about coming back to power after 10 years, the BJP hopes to not only open its account in the state but also turn kingmaker for a non-Congress government in the event of a hung assembly. The BJP is contesting in 39 of the 40 seats. The ruling Congress and the main opposition party, the Mizo National Front, have fielded 40 candidates each. The state saw over 80 per cent voting.

Votes in these five states will be counted on Tuesday.