For Madhya Pradesh, exit polls see both BJP and Congress going neck and neck but falling short of a clear majority in the 230-member assembly. 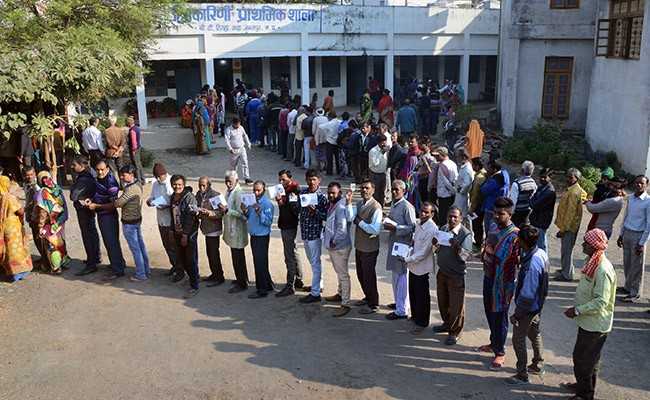 Exit polls for five states in elections predict a worrying outcome for the BJP in Madhya Pradesh, Chhattisgarh and Rajasthan.

An aggregate of exit polls shows the BJP's winning streak is set to end in Madhya Pradesh and Chhattisgarh, both heading for hung verdict. The Congress is tipped to win a clear majority in Rajasthan. The party is likely to lose Mizoram and K Chandrashekar Rao will retain Telangana, the exit polls say.

For Madhya Pradesh, exit polls see both BJP and Congress going neck and neck but falling short of a clear majority in the 230-member assembly. According to an aggregate of nine exit polls, the BJP will get 110 seats in the state, while the Congress will get 109 seats. The halfway mark is at 115. Mayawati's Bahujan Samaj Party will get 2 seats.The assembly elections in these states have been billed as the semi-final before next year's general elections.

Here are the updates on the story:

Kamal Nath when asked who will be the CM if Congress wins in Madhya Pradesh: We will win more than 140 seats. Wait till tomorrow, everything will be clear by then. pic.twitter.com/vNJt5wY8Hi

Rajasthan: Re-polling is underway at booth no.163 in Karanpur assembly constituency. Election Commission had nullified the votes cast there on 7th December due to malfunctioning of the EVM. #RajasthanElections2018pic.twitter.com/0ac9mFfpLi

Dec 10, 2018 11:54 (IST)
Over 1.74 lakh EVMs store fate of 8,500 candidates of five states
The electoral fate of over 8,500 candidates of five states which went to polls recently is sealed in over 1.74 lakh EVMs which will be opened Tuesday.
These electronic voting machines are now stored in over 670 strongrooms across Rajasthan, Madhya Pradesh, Chhattisgarh, Mizoram and Telangana.
A total of 1,74,724 EVMs were used at polling stations in the five states.
The maximum 65,367 machines were used in Madhya Pradesh.
A little over 8,500 candidates were in fray in the five states with 2,907 in Madhya Pradesh.
Dec 10, 2018 08:16 (IST)
Chief Electoral Officer has directed that there will be no webcasting during the counting of votes in Madhya Pradesh, news agency ANI said. He has also directed that WiFi will not be used in the counting hall and CCTV cameras will be installed.
Dec 09, 2018 22:52 (IST)

Two days ahead of counting, Madhya Pradesh Chief Minister Shivraj Singh Chouhan today said his party BJP will retain power in the state and accused the Congress of creating doubts in minds of people about the reliability of Electronic Voting Machines (EVMs).

Mr Chouhan, seeking a fourth straight term in office, said the Congress will try to create hindrances on the counting day.

Mr Chouhan held an audio conference with all the 230 party candidates and discussed the preparations for the counting. State BJP president Rakesh Singh also took part in the conference.

Dec 09, 2018 20:06 (IST)
Rajathan Assembly Polls: Less voting percentage despite star campaigners
Rajasthan witnessed over one per cent lower voter turnout in Friday's assembly poll as compared to the previous assembly election despite marathon election rallies by star campaigners of both the BJP and the Congress.
As per the Chief Election Office, voter turnout in 2018 assembly election was recorded at 74.12 per cent compared to 75.23 per cent in 2013 despite its efforts to create awareness among voters through various means.
Dec 09, 2018 17:54 (IST)
Chhattisgarh Chief Minister Raman Singh says, "Situation of hung assembly will not come. BJP will form govt with majority. I am confident that BJP will form govt for the 4th time without anyone's support." 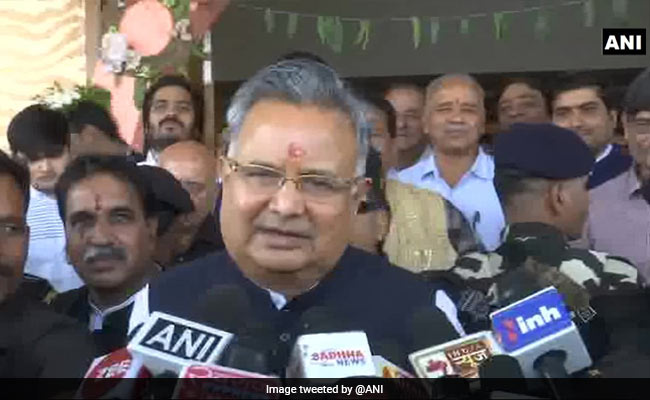 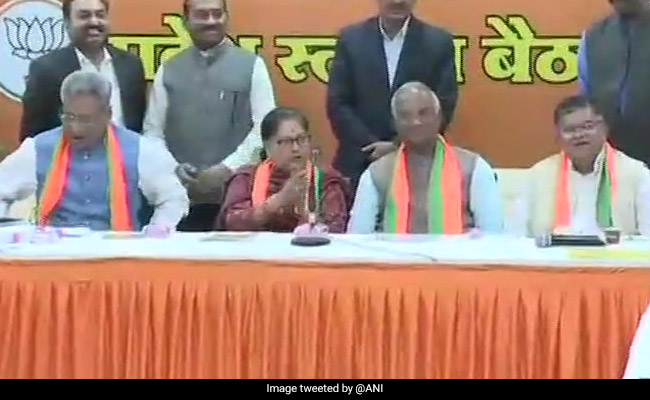 Dec 09, 2018 15:05 (IST)
Not Part Of Anti-BJP Front, No Initiative From Congress On Alliance: AAP
Senior Aam Aadmi Party party leader Sanjay Singh said that his party is not part of an anti-BJP formation or that it is in talks with the Congress for a possible alliance ahead of the general elections.
"There is no initiative from the Congress or from the AAP for an alliance. In the three states (Rajasthan, Madhya Pradesh and Chattisgarh) where we fought the assembly elections, we did not have a tie-up with the Congress anywhere. First, there should be talks (between the two sides) and an initiative to actually know if we are comfortable together or not. There is no initiative from the Congress or from the AAP for an alliance," Mr Singh said.
The BJP swept Delhi in the 2014 Lok Sabha elections, winning all the seven seats, while the AAP emerged as the main party in the assembly polls a year later, winning a staggering 67 of the 70 seats.
Dec 09, 2018 12:27 (IST)
73.20 per cent voter turnout in Telangana
Telangana has recorded a turnout of  73.20 per cent in the assembly election on Friday, election authorities said.
The highest turnout of voters was reported in Madhira Assembly constituency at 91.65 per cent.
It was followed by Alair 91.33, Munugode 91.07, Narsapur 90.53, Bhongir 90.53 and Narsampet 90.06.
The lowest percentage of votes was polled in Charminar 40.18, followed by Yakutpura 41.24, Malakpet 42.74, Nampally 44.02, Jubilee Hills 45.61, Chandrayangutta 46.11 and Secunderabad Cantonment 49.05.
Dec 09, 2018 12:25 (IST)
Madhya Pradesh went for voting on November 28, and the results will be announced on December 11.
As many as 2,899 candidates were in the fray including 250 women and five third gender candidates.
Dec 09, 2018 11:51 (IST)
BJP Confident Of Fourth Term In Madhya Pradesh
Bharatiya Janata Party leaders in Madhya Pradesh said that they were confident of winning the elections and forming the government in the state for the fourth consecutive time.
"We reviewed the situation in the state and discussed the future course of events. We are going to form the government on December 11, so we discussed how the event of oath taking ceremony is going to be like. The finalisation of the date has not been done as yet, we have left that decision on the chief minister so that he finds a suitable auspicious time for the same. But I am certain that we are forming the government," a leader of the party has claimed.
Madhya Pradesh BJP leaders on Saturday held a meeting at the party headquarter in Bhopal. the meeting was attended by chief minister Shivraj Singh Chouhan, state President Rakesh Singh, state Home Minister Bhupendra Singh and BJP MP Manohar Untwal.
Dec 09, 2018 11:42 (IST)

After its confession that it has failed to control the use of black money in elections and mass deletion of voter names in Telangana, what can the EC do to salvage its reputation?

It can match the EVM count with the VVPAT count. It now does it for ONE booth (polling unit).
Why can't it be done for ALL the booths?

EC has given NO valid reason so far for refusing to match the EVM and VVPAT counts.

Matching the counts for one booth is tokenism. The counts must be matched for all booths to eliminate the suspicion of EVM tampering.

If delay in declaration of results is the reason, the delay will be no more than 2-3 hours. Nothing will be lost if the results are declared at 5 pm on counting day.

Dec 09, 2018 11:30 (IST)
BJP chief Amit Shah has claimed that the Samajwadi Party-BSP alliance may not have any impact in various states barring Uttar Pradesh.
Most of the regional parties are unlikely to have any impact on the electoral outcomes outside their respective states, Mr Shah said while asserting that politics is also about chemistry.
"Politics is not physics where two plus two becomes four, it is chemistry. The grand alliance is nothing but a sham. Perhaps only in Uttar Pradesh the grand alliance between SP and BSP could pose some challenge for the party. The BJP had got more than 40 per cent vote share in the state and will fight for more than 51 per cent vote share in the next general elections," he said.
Dec 08, 2018 18:24 (IST)
BJP's Tamil Nadu President Tamilisai Soundarajan said the party would definitely win the state assembly elections in Chhattisgarh, Madhya Pradesh and Rajasthan.
Dec 08, 2018 15:09 (IST)
Only BJP would form the government, Shivraj Chouhan
Dec 08, 2018 15:01 (IST)
BJP will form government with full majority in Chhattisgarh: BJP leader
BJP leader Gauri Shankar said that the BJP will win around 50-55 seats in Chhattisgarh.
"Our aim was of 65 plus and we have worked hard for it with honesty. Now our aim is about 50-55 seats. In coming time BJP will form government with full majority in Chhattisgarh," he said.
Dec 08, 2018 14:45 (IST) 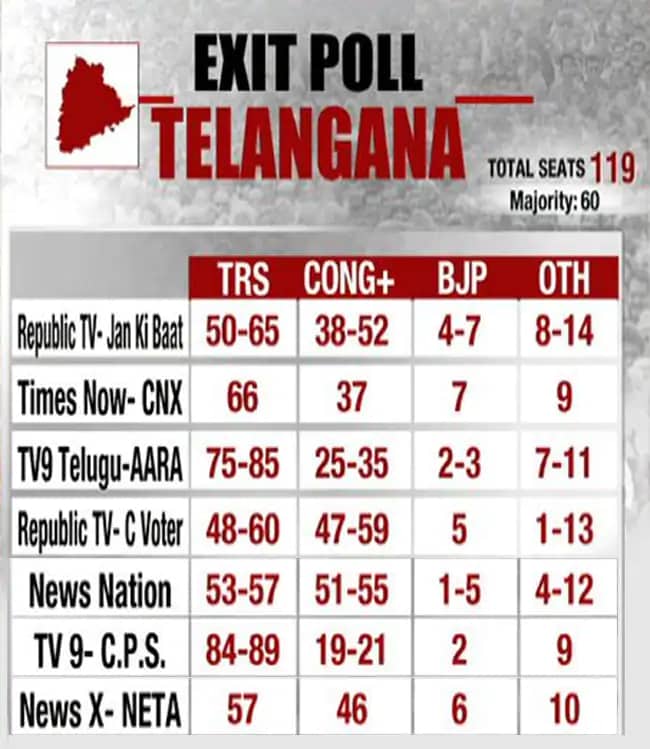 In Telangana, India's youngest state which voted for the second time on Friday, exit polls show Telangana Rashtra Samithi chief K Chandrashekar Rao's gamble of dissolving the state assembly eight months before schedule paying off.
The TRS will get 67 of the state's 119 assembly seats, where the majority mark is at 61. The Congress-Chandrababu Naidu combine will get 39 seats and the BJP five seats, an aggregate of 11 exit polls have predicted.
Dec 08, 2018 13:45 (IST) 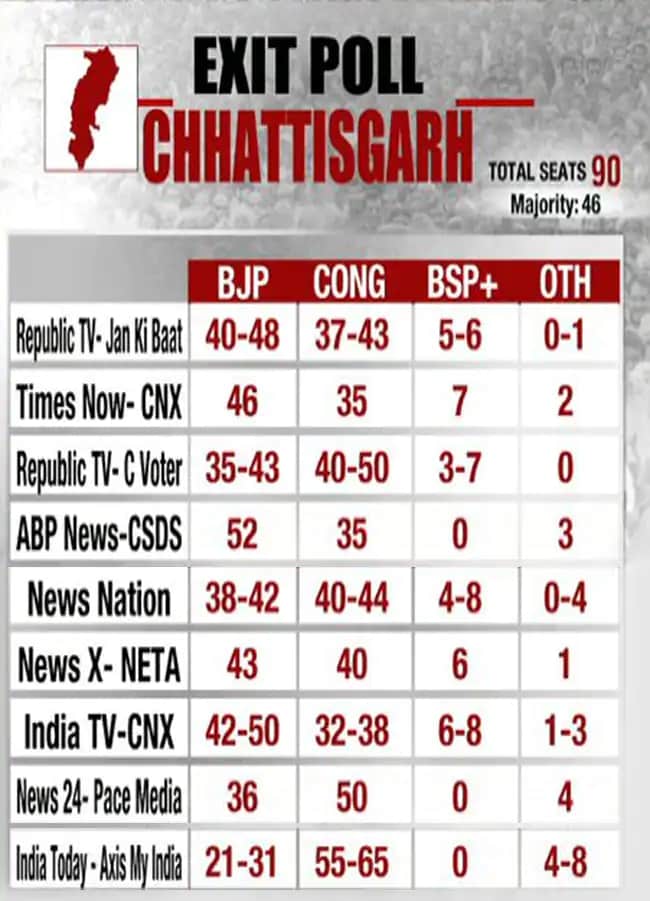 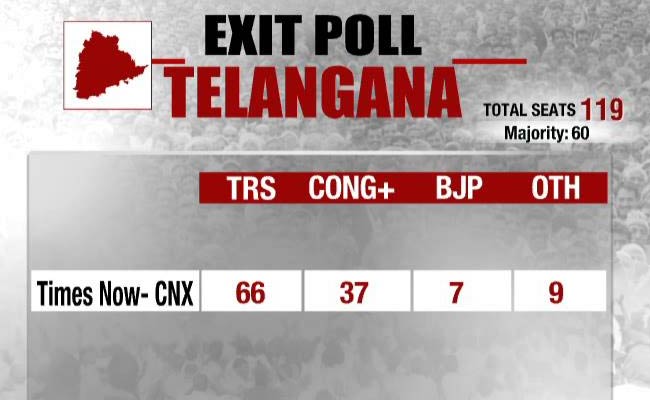 Successive electoral defeats have scarred the Congress irreparably. Their leaders are celebrating exit polls as if they were actual results...

Dec 08, 2018 12:44 (IST)
EVMs have mysterious powers in PM Modi''s India: Rahul
Congress President Rahul Gandhi on Friday urged his party workers to be vigilant against "EVM tampering" as voting came to an end in Telangana and Rajasthan, cautioning them that "in (Prime Minister Narendra) Modi's India, EVMs have mysterious powers".
"Congress party workers, be vigilant after polls close today. In MP, EVM's behaved strangely after polling: Some stole a bus and vanished for two days! Others slipped away and were found drinking in a hotel," tweeted Mr Gandhi.
The Congress chief was referring to the incident in Madhya Pradesh's Sagar where electronic voting machines were transported in a vehicle without any registration number and reached the collection centre 48 hours after the voting ended.
Dec 08, 2018 12:42 (IST)
In Rajasthan, where assembly elections were held alongside Telangana, a voting machine was found lying on national highway. Later it was found that the voting machine was part of reserve and it fell down during transportation.
Dec 08, 2018 12:40 (IST)
Jwala Gutta's name missing from electoral roll since 2016: Poll Body Boss
Shuttler Jwala Gutta's name has been missing from electoral roll since 2016, Telangana's election body chief said after she took to Twitter alleging that her name had disappeared from the voters' list and she could not vote in Friday's assembly elections in the state.
Rajat Kumar, Telangana's Chief Electoral Officer told news agency ANI, "I do empathise with Jwala Gutta. Actually, her name has been missing from electoral roll since 2016. So, in 2016, 2017, 2018, the inclusion was not there. We will rectify that situation."
A controversy has erupted over the fairness of assembly elections held in Telangana after ace Indian Badminton player Jwala Gutta alleged that she could not cast vote in Friday's election as her name had been missing from the voters' list. The shuttler also shared similar tweets by several voters who also encountered a similar problem.
Dec 08, 2018 12:38 (IST)
For Madhya Pradesh, exit polls see both BJP and Congress going neck and neck but falling short of a clear majority in the 230-member assembly. According to an aggregate of nine exit polls, the BJP will get 110 seats in the state, while the Congress will get 109 seats. The halfway mark is at 115. Mayawati's Bahujan Samaj Party will get 2 seats.
Dec 08, 2018 12:38 (IST) 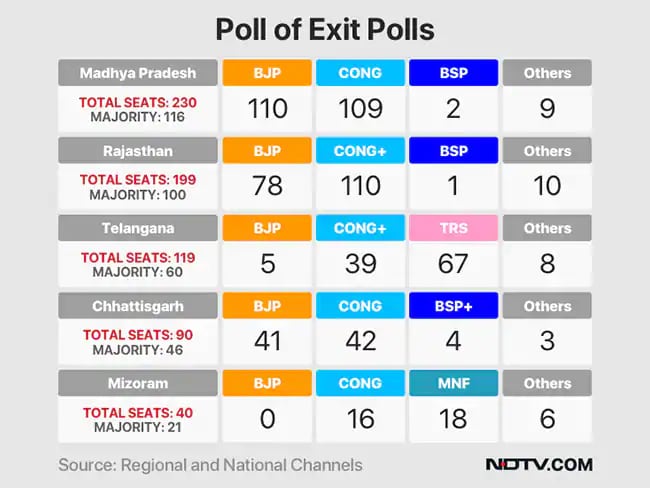 Dec 08, 2018 12:37 (IST)
Exit polls have predicted a hung assembly in Madhya Pradesh and Chhattisgarh. In Rajasthan, the Vasundhara Raje government is on its way out, it said. The Congress is likely to lose Mizoram and K Chandrashekar Rao will retain Telangana, the exit polls say.
Madhya PradeshChhattisgarh