The shifting of the Assam minaret without dismantling it is being made possible using a hydraulic system brought by a company in Haryana. 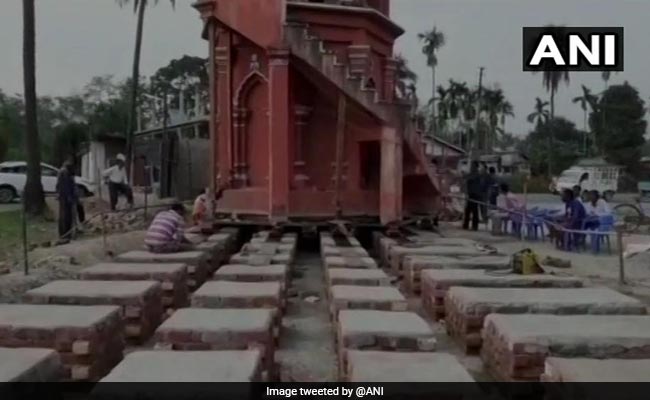 More than 100 people are working on shifting the ancient minaret in Assam to a new location.

A 100-year-old two-storeyed minaret in Assam is being shifted to a new location to pave for the highway. A group of scientists are working on this project to get the ancient structure lifted and preserve it at a new place at Nagaon's Puranigudam.

"Situated along NH 37, the minaret is being shifted as four-laning of the highway is being done. It will be done within 15 to 20 days," said engineer Gurdeep Singh.

The shifting of the minaret without dismantling it is being made possible using a hydraulic system brought by a company in Haryana.

"More than 100 people are engaged in this work. It is being done under complete safety. The work is underway in two phases," the engineer said.

About 50 per cent of the shifting work has been completed.

Due to construction of the historic monument, the renovation of National Highway 37 from Nagaon to Upper Assam was facing difficulties. With this situation, the administration took the decision to shift the mosque. However, the final nod was given after discussing the issue with the Hindu and Muslims.

For the residents, the mosque is a symbol of unity between the Hindu and Muslims. The mosque stood even in a devastating earthquake that hit the city in 1950.