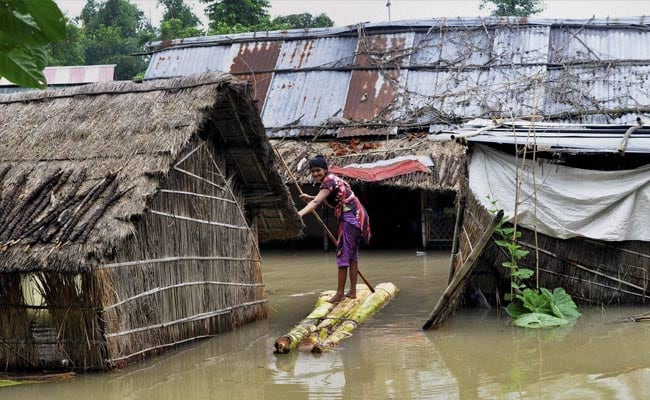 A woman crosses a flooded area over a raft made of banana tree trunks in Assam's Morigaon district. (Press Trust of India)

Guwahati: The flood situation across Assam continued to be grim as the toll rose to 13 today and 18 districts still remain inundated, officials said.

A total of 1,291 villages have been submerged so far, affecting 6.16 lakh people. The district administrations have opened 260 relief camps, housing 1.79 lakh people.

Mr Gogoi asked the concerned departments to expedite rescue and relief operations in all the flood-hit areas.

He praised the National Disaster Response Force (NDRF) and the army for their efforts in rescuing marooned people, and said ministers and officials have fanned out to the affected areas and were monitoring the relief operation.

The chief minister said the first priority of his government was providing relief to the flood-hit people.

He said he has instructed the deputy commissioners of the affected districts to leave no stone unturned to extend all possible help to the affected people, especially children and women.

"Restoration of surface communication and repair of breached embankments have also been accorded priorities," he said.

Mr Gogoi slammed the central government, saying it was yet to release a sizeable chunk of funds sought by the state for infrastructure damage caused by floods last year.

"The Centre has only released Rs 380 crore so far. We submitted memoranda to the central government including the prime minister and the home minister, but we have not received the funds sought by us for huge infrastructure damage caused by floods last year," he said.

Mr Gogoi said there are no funds constraints in providing relief to the affected people.

"We have funds for relief work. What we require from the central government is sufficient funds for building infrastructure such as roads, bridges, school buildings, health centres, houses and embankments damaged by floods last year and proper rehabilitation of the flood-hit people," he said.

Mr Gogoi said the state government would prepare an assessment report highlighting the damage only after the flood waters recede.

3 Security Guards Injured In Gurgaon After Attack By Group Of Men: Police