"Double-Engine Of Development" Should Be Strengthened In Assam: PM Modi

PM Modi was in Assam to inaugurate multi-crore projects in the oil and gas sector and two engineering colleges. 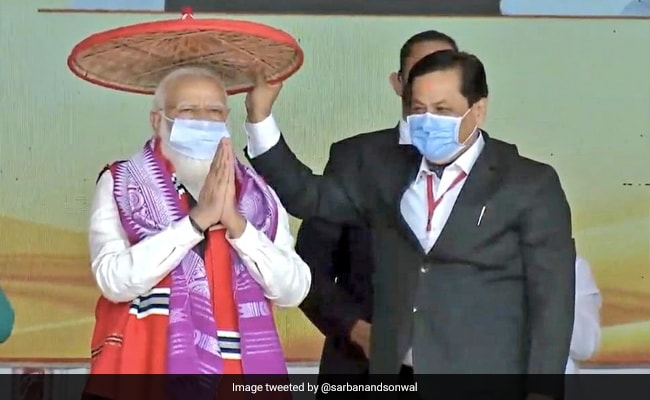 Prime Minister Narendra Modi today said a "double-engine of development" should be strengthened in Assam as he visited the northeastern state, where elections are due in April-May, for the third time in the last few weeks.

"Assam has everything that is enough for every Assamese. We just need to ensure that the double-engine of development that is already in place is strengthened. I assure the people of Assam that the speed of development will be increased," PM Modi told crowd in Dhemaji town, about 430 km from state capital Dispur. He was in Assam to inaugurate multi-crore projects in the oil and gas sector and two engineering colleges.

Last month, the Prime Minister sent out a strong note of reassurance to the 70-odd indigenous tribes of Assam, granting recognition for the land they have lived on for generations but without any official documentation.  The land ownership pattas to over 1 lakh indigenous people "will guarantee their swabhiman, swadheenta, and suraksha," PM Modi had said in Sivasagar, the historical capital of the Ahom kings.

Assam has everything that is enough for every Assamese.

We just need to ensure that the double-engine of development that is already in place is strengthened. I assure the people of Assam that the speed of development will be increased.

Two weeks later, in Dhekiajuli, he laid the foundation stone for two medical colleges and launched a road and highway project.

The centre and the state "are working in a balanced development model for Assam. We are focusing on infra development for the state. The previous government had given a step-motherly treatment to the the north bank of Brahmaputra (colloquially Upper Assam). Our government, led by Sarbananda Sonowal, has done away with this (step-motherly attitude)," PM Modi said.

Back in December 2019 and January 2020. North Bank saw vehement protests against the Citizenship Amendment Act, 2019 brought by the BJP-led NDA government at the centre in December 2019.

With the election in Assam two months away, the Congress last week started anti-Citizenship (Amendment) Act or CAA "gamosa collection drive". The Assam Congress said it will collect 50 lakh gamosas - a traditional cloth in Assam - from the state to be displayed at a memorial for anti-CAA protests that the party said would be built if it comes to power.

The support for the campaign from upper Assam has been "overwhelming", the party said. Regions in Upper Assam, especially Jorhat and Golaghat, had been traditionally Congress strongholds.

In his speech today, however, PM Modi, did not comment from commenting on CAA, oil price hike or farmers' protests against new agricultural laws - three issues that have prompted attacks from the opposition leaders against the centre.

Suggesting that the elections may be declared in March first week, PM Modi said, "Last time, the election (2016 Assembly elections) was declared on March4. This time too, it might be declared around March 7. My focus is that I will try to visit the poll-bound states (West Bengal, Tamil Nadu, Kerala)."