Assam: Curfew relaxed in Kokrajhar for second day in a row 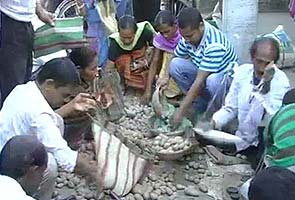 Guwahati: As Assam's Kokrajhar district remained calm and violence free for the second day in a row, the curfew has been relaxed in most parts of the district from 8 am to 4 pm. In the last ten days, a total of 10 people have been killed in the district.

In July, Kokrajhar was the epicentre of sustained ethnic violence, the worst in over a decade in the state of Assam. The area is simmering again because of a new surge of hostilities between the indigenous Bodo tribals and Bengali-speaking Muslim settlers.

An elected member of the Bodo Territorial Council (BTC), Mano Kumar Brahmo, was arrested with weapons and ammunition from his home in Kokrajhar on Saturday morning. He is the closest aide of the BTC chief. Two AK assault rifles, two magazines and 60 rounds of ammunition were recovered from his possession. The BTC is an autonomous body which governs Bodoland - made up of four districts in south Assam including Kokrajhar.

The administration seems confident that with a dramatic crackdown and arrest of an elected leader with arms, the message has been conveyed to miscreants triggering violence.

Five columns of the Army have been moved to Kokrajhar and Gosaigaon from nearby Agiya and they are holding flag marches in sensitive areas - an exercise designed to indicate that troops are at hand and working to revive law and order.

The Home Ministry has issued what it calls a routine advisory keeping the Army on alert and asking the state to arrest those responsible for spreading misinformation and disorder. Prime Minister Manmohan Singh, who is a Rajya Sabha MP from the Assam, has assured Chief Minister Tarun Gogoi of all help.

Two months ago, clashes between the local Bodo and Muslim communities continued for weeks. 99 people were killed and five lakhs displaced from their homes.

The ethnic violence that erupted in Assam in July and August this year caused fierce aftershocks in cities like Bangalore and Hyderabad - text messages warned North Easterners living here that they would be punished in retaliation for the killing of Muslims in and around Kokrajhar. Thousands of people from states like Assam and Manipur boarded trains home.

The volatility in Bodoland is the result of a growing battle for agricultural land and the changing demographics of the area. The Bodos believe that they are being reduced to a minority by Muslim settlers; both are farming communities. Local Muslims say they are not illegal immigrants from neighbouring Bangladesh and that they are being marginalised by Bodos, who are economically and politically stronger.

The Bodoland Territorial Council was created in 2003 when the Bodo Liberation Tigers, an armed group leading the movement for an independent state, folded into the Congress government.