"I will retire, but not resign, from the BJP on July 14," Shiladitya Dev said. 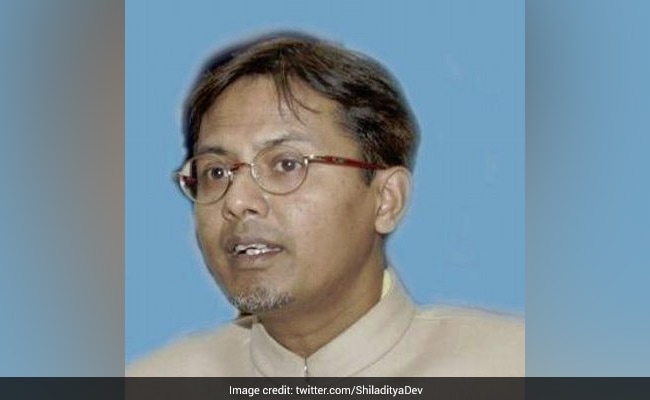 "I have been in BJP for 30 years. But nowadays there is no value for people like us," Shiladitya Dev said

Assam BJP MLA Shiladitya Dev on Sunday said he will quit the party, alleging neglect and groupism by leaders, but clarified that he will not join any other party.

Addressing a press conference at his constituency Hojai, Mr Dev, who is in news frequently for making objectionable statements over a host of issues, said he will complete his term as legislator till the assembly polls next year.

"I have been in BJP for 30 years. But nowadays there is no value for people like us. Nobody can say that I have ever done any lobby for making me minister. I have worked in Delhi for 17 years and in the ministry too," he said.

"But today a situation is being created that we might be killed (politically). So better I should go away with my prestige. After consulting with my well wishers, I will retire, but not resign, from the BJP on July 14," Mr Dev told reporters.

When asked what he meant by retiring, he said that he will not join any other party such as the Congress or the AIUDF, and will only work for the people.

The first-time MLA alleged negligence by state BJP president Ranjeet Kumar Dass, saying, "Last night he (Dass) received (my call) and said he would be calling me soon, but no call has come yet. I have informed him through WhatsApp that I am retiring on July 14, but no reply has come yet."

"BJP is a party with a difference. It''s not like the Congress or the AIUDF. We follow ideology. If we deviate, then I cannot be a part of this after being part of the party for 30 years," he added.

Mr Dev also alleged that there is not a single leader, who can take decisions in times of crisis.

"I am in a crisis, then whom should I inform or discuss with? Today, informing one leader is not sufficient. There are too many leaders in the party.

"If I tell so many people, then obviously there will be groupism and there will be no correct decision. In India, there is one leader and he is Narendra Modi. But in Assam, we do not have one single leader," he alleged.

Mr Dev further said, "Probably I am unfit today in the BJP. So it is better to leave the party than getting embarrassed in front of the people. It''s like cricket. We should be in the team till we play well. If I stay, the party may suffer. I will continue to work for the people in the remaining 10 months."

In the 126-member Assam Assembly, BJP has 60 members, while its allies AGP has 14 MLAs and BPF 12 legislators, besides the coalition has support of one Independent.

Mr Dev has been in the news for making controversial statements, mostly targeting a particular community, leading to even registering of an FIR at the Silchar police station in 2018 for allegedly making provocative remarks to divide Assamese and Bengalis.

A case was also filed in the same year in the Court of Chief Judicial Magistrate, Nagaon, against the BJP MLA for his frequent communal remarks on the National Register of Citizens (NRC) in the state.

Mr Dev had alleged that Hindu refugees were being shown as foreigners, while the names of Muslim-Bangladeshis were published in the final NRC.

After unidentified gunmen killed five persons in Tinsukia district in November 2018, Dass had said provocative statements by some groups and individuals were to be blamed for the case and informed the media that Mr Dev had been warned twice not to make any such comments, or else the BJP would write to the Parliamentary Board for taking action against him.