Assam Assembly Election 2021: "Football is very popular among young people here. If I have to speak in their language, I would say that the people have yet again shown a red card to Congress and its mahajot (alliance)," PM Narendra Modi said 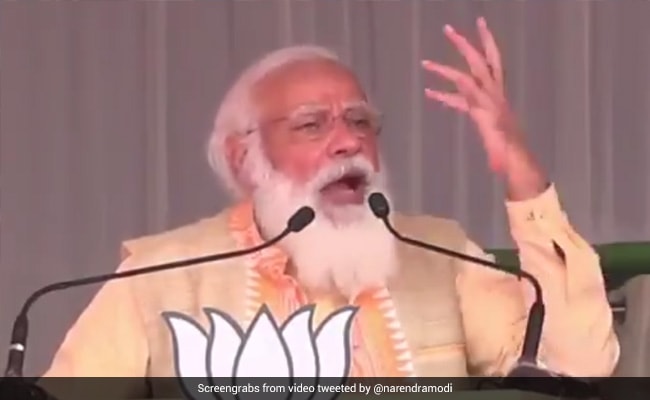 Prime Minister Narendra Modi, who was at Bodoland Territorial Region for the first time after the signing of a peace accord last year, attempted to connected with young people in the region through talks about football and attacked the Congress and its allies.

"Football is very popular among young people here. If I have to speak in their language, I would say that the people have yet again shown a red card to Congress and its mahajot (alliance). People of Assam trust the NDA for development, peace and security of the state. This is an election between the maha jhooth of mahajot (Congress-AIUDF grand alliance) and maha vikas of the double engine government," PM Modi said at a rally in Kokrajhar, the Bodoland Territorial Region (BTR) headquarters in western Assam.

The political scenario of BTR has much changed since PM Modi's last visit, when it was still called Bodoland Territorial Areas Districts and the Bodoland People's Front (BPF) was still an ally of the BJP.

The United People's Party Liberal (UPPL) came in prominence after signing of the accord between the insurgents of the National Liberation Front of Bodoland (NDFB), Assam government and the centre, with PM Modi in attendance, in last January while the ties with the BPF severed to an extent that the BJP formed an alliance with the UPPL in the council election last December, despite the BPF having the single-largest majority. The BPF, then, joined the Congress's alliance in this election.

PM Modi's visit is expected to sway a certain BPF loyalist votes in the BTR that is bound for election in the third phase on April 6.

Talking about the upcoming development projects taken up by the "double engine" BJP-led government both in the centre and the state, PM Modi said, "A medical college is being set up in Kokrajhar at a rapid pace. A package of Rs 1,500 crore has also been provided for development. Bodoland University, Central Institute of Technology, Bodoland Bhawan and several other institutions are becoming the identity of this region," PM Modi said.