"After long deliberations with party workers and for reasons well known to all Congressman and public, I hereby resign from the primary membership of the Congress," Ashok Tanwar tweeted 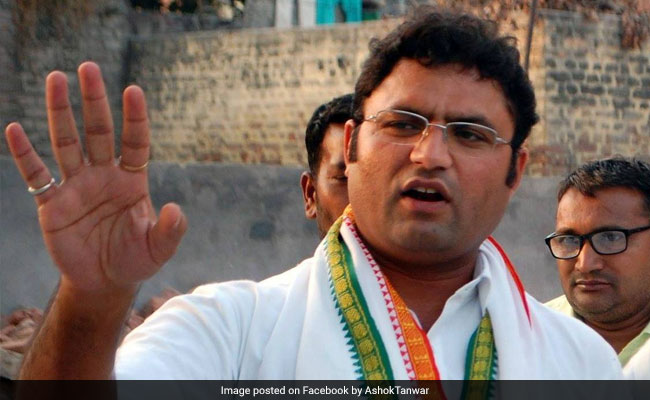 Sulking Haryana Congress leader Ashok Tanwar, who was removed as the party's state chief last month, has resigned from the Congress just two weeks before state elections. Ashok Tanwar, said to be close to former Congress president Rahul Gandhi, said "There is a conspiracy going on to bring down leaders who were guided by Rahul Gandhi."

Announcing his decision to quit on Twitter, Mr Tanwar posted a four-page resignation letter addressed to Congress president Sonia Gandhi, in which he said, "The Congress is going through existential crises, not because of its political opponents but because of serious internal contradiction."

"I after several months of consideration tender my resignation from the primary membership of the Congress party, which I nurtured from my sweat and blood. My fight is not personal but against the system which is destroying the grand old party," the letter added.

Mr Tanwar, who had openly revolted alleging irregularities and corruption in ticket distribution for the Haryana elections due in two weeks, said for reasons well known to all Congressmen and public, he is resigning from the primary membership of the Congress.

After long deliberations with party workers and for reasons well known to all Congressman and public, I hereby resign from the primary membership of the @INCIndiapic.twitter.com/qG9dYcV6u2

Earlier this week, Mr Tanwar had quit several party panels, saying in a letter to Sonia Gandhi that he had taken the decision with "immense pain" and "after exhausting all avenues to get my voice heard".

Last Sunday, Ashok Tanwar had protested outside Sonia Gandhi's home in Delhi alleging irregularities in the choice of poll candidates.

In September, Mr Tanwar was replaced as Haryana Congress chief by Kumari Selja under pressure from former Chief Minister Bhupinder Hooda, with whom he had a long-running feud.

Mr Tanwar alleged that the Congress in Haryana had turned into "Hooda Congress" as those "who had worked against the party's interests in the last five years had been given prominence over those who slogged to strengthen the opposition party in Haryana".

Ashok Tanwar was appointed the Haryana Congress chief in 2014. He was yesterday named as a star campaigner for the Congress in Haryana which will vote on October 21. Results for the 90-member Haryana Assembly will be counted along with Maharashtra three days later. In both states, the Congress was voted out in 2014 and failed to register its presence in the Lok Sabha elections earlier this year.

The Congress is facing revolt not just in Haryana, but also in Maharashtra. In a series of tweets on Thursday, senior Maharashtra leader Sanjay Nirupam declared that he would stay away from the campaign and threatened to quit.