Ajay Vishnoi, a former Madhya Pradesh minister and BJP legislator, condemned Maneka Gandhi's alleged spat with a vet in Agra over a call. 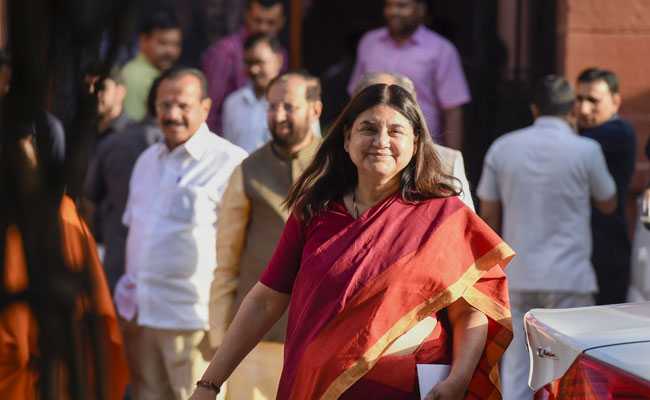 Maneka Gandhi was heard abusing the vet in a purported call this week. (File)

Caught in a storm over an abusive call she allegedly made to a veterinarian in Uttar Pradesh's Agra this week, BJP MP Maneka Gandhi has now come under attack from a leader of her own party.

Former Madhya Pradesh minister and BJP legislator Ajay Vishnoi on Saturday said he was "ashamed" that Ms Gandhi was an MP from his party.

"The words used by BJP MP Maneka Gandhi to talk to veterinary doctor Vikas Sharma don't prove that Veterinary College Jabalpur is bad but instead prove how poor a woman she is. I am ashamed she is a party MP (not a leader)," he said in a tweet in Hindi.

The Indian Veterinary Association also condemned the language allegedly used by the former union minister against the Agra veterinarian.

A purported audio clip of a telephonic conversation between Ms Gandhi and the veterinary doctor had gone viral on social media this week where the female voice can be heard abusing and threatening the doctor, blaming him for an alleged botched surgery on a dog.

Ms Gandhi is also purportedly heard asking vet NL Gupta to return the money he has taken from a client after performing the surgery and threatening to have his license cancelled.

The former Union Minister has not commented on the controversy yet.

The voice in the audio clip could not be independently confirmed but the vet alleged that he got a call from the Sitapur MP.

During the course of the purported conversation, Ms Gandhi is allegedly heard using expletives in Hindi against the doctor who addresses her as "'ma'am".

"I got a call from Member of Parliament Maneka Gandhi on June 21 regarding the surgery of the dog. I was shocked when she asked me to pay a compensation of Rs 70,000 to the owner of the dog or else she would get my license cancelled," Dr Gupta told PTI.

"Besides, she insulted my profession, my father and my eligibility and used abusive language," he alleged.

Dr Gupta said he had informed the dog owner about the post-operative care, but the animal was not looked after properly.

"Due to mismanagement in post-operative care by the owner and improper antibodies treatment, the stitches came undone," he said.