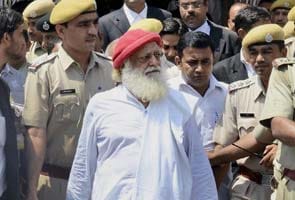 Asaram Bapu, 75, was arrested in August and has been in prison in Jodhpur in Rajasthan since then.

Jaipur: Spiritual leader Asaram Bapu, in jail on charges of sexually assaulting a school girl, has been refused bail today by the Rajasthan High Court.

The 75-year-old was arrested in August and has been in prison in Jodhpur in Rajasthan since then.

Investigators alleged in court today that he has paedophilia.

The guru's famous lawyer, Ram Jethmalani, alleged that the teen complainant is not under-age or younger than 18, and that she made up the charges because she likes to spend time online and watch movies and was restricted in both activities at the boarding school where she was enrolled at one of Asaram Bapu's ashrams in Madhya Pradesh.

Promoted
Listen to the latest songs, only on JioSaavn.com
In August, she travelled with her parents to meet him at his retreat in Jodhpur.  She has told the police that she then spent an hour with him in a room, while her parents waited outside.  He allegedly promised her family that he would exorcize her of evil spirits.

Asaram Bapu's son has said that the school girl is mentally disturbed.