As Indian students in US decrease, Chinese hits record high 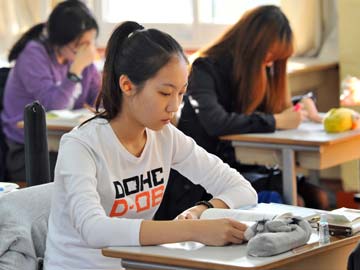 Washington: The number of Indian students studying in the US has witnessed a 3.5 per cent decline in the 2012-13 academic year due to the sharp devaluation in the Indian rupee.

A total of 96,754 students from India were studying in the US in 2012-13, down by 3.5 per cent from the previous year, thus marking three consecutive years of decline, a report said.

India, which was the leading place of origin for international students in the US from 2001-02 through 2008-09, however, retained the top spot after China, said the Educational Exchange Data from Open Doors 2013 released by the Institute of International Education (IIE).

Students from the top three places of origin - China, India, and South Korea - now represent 49 per cent of the total number of international students in the United States, with the number from China increasing, and the numbers from India and South Korea declining.

The number of Chinese students flocking to the US colleges and universities in the United States has however helped the country to reach a record high of 8,19,644 international students, an increase of seven per cent in the 2012-13 academic year.

US students studying abroad increased by three per cent to an all-time high of more than 2,83,000.

"It is getting more expensive for Indian students to study outside of their own country due to decreases in the value of the Rupee. However, there is every indication that those who do study abroad continue to see the United States as their first choice for study abroad", said Rajika Bhandari, IIE's deputy vice president for Research and Evaluation.

India remains the second largest sending country to the US, with only China sending more students, she explained.

"The United States remains the leading destination for students from India who study outside of their own country, followed by the United Kingdom and Australia. In 2012-13, about 97,000 Indian students studied in the US.