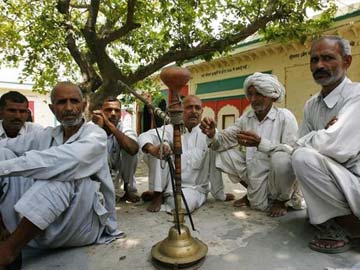 Villagers sit after attending a panchayat, or village council meeting, at Balla village in Haryana May 13, 2008

New Delhi: Arvind Kejriwal, the chief minister of Delhi, has said he does not see the need for  banning khap panchayats or unelected all-male village councils that often endorse harsh treatment of women because they serve a "cultural purpose."

Mr Kejriwal and his  Aam Aadmi Party (AAP) have declared that their mission is to cleanse India's polity of corruption, a promise that has considerable appeal among urban voters.

But the 45-year-old former tax inspector's soft stand on khap panchayats is likely to disappoint many supporters who hoped his progressive social politics would include a strong agenda for women's empowerment. (AAP eyes Haryana, open to dialogue with 'khap panchayats')

"No, it is not a question of banning these panchayats," Kejriwal told Thomson Reuters Foundation late on Monday.  "Khap Panchayats are a group of people who come together. There is no bar on people to assemble in this country ... (But) whenever they take a wrong decision, whenever they take an illegal decision, they ought to be punished."

Khap panchayats in states like Haryana frequently issue misogynistic diktats that ban women from using cellphones or visiting markets without a male relative. Their most extreme punishment is ordering 'honour killings' or the deaths of young couples who marry  against the khap's guidelines for inter and intra caste relationships.

While the punitive edicts issued by these de-facto courts have been condemned by the Supreme Court, criticised by the media, and slammed by feminists, the councils continue to act with impunity, unchallenged by police and government.

Last week, 13 men were arrested after they were alleged to have gang-raped a 20-year-old tribal women on the orders of a village court in West Bengal as punishment for having a relationship with a man from another community. (West Bengal gang-rape, allegedly ordered by village council, stuns Supreme Court)