Arvind Kejriwal's decision comes after a Supreme Court order last week that was seen as a setback for the Aam Aadmi Party government. 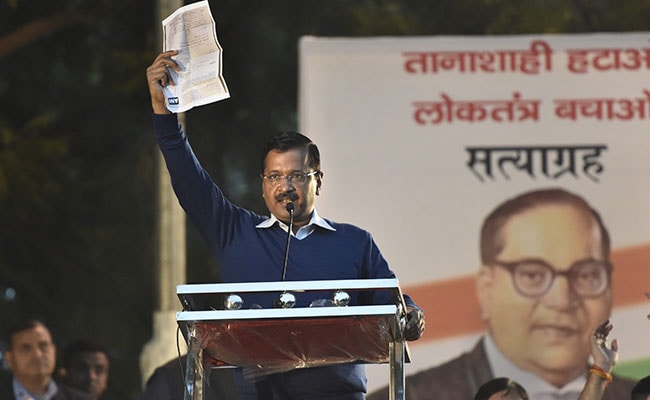 Delhi Chief Minister Arvind Kejriwal on Saturday announced that he would start an indefinite hunger strike demanding complete statehood for Delhi next month. "From 1st March I will begin a hunger strike. I am going to fast till we get statehood. I am ready to face death," Mr Kejriwal said in the assembly.

Accusing both the Congress and the BJP of "back-stabbing" Delhi, the chief minister said, "I want to tell the Prime Minister to handle Pakistan, which he has not been able to do, and give the Delhi Police and the Municipal Corporation of Delhi to the people of Delhi."

"Even the British did not commit such atrocities. The people of Delhi pay Rs 1.5 lakh crore as income tax and received only Rs 325 crore from the centre," Mr Kejriwal said, calling the campaign "aar-paar ki ladai" (the final battle).

I cannot repay the debt of my Delhi for all that the people here have given me in my life. It will be my proud privilege to lay down my life fighting for Delhiites rights. Delhi deserves full statehood & must get it at all costs

The state assembly adopted a resolution demanding that the Union Home Ministry take necessary legal and legislative steps to declare Delhi a "full-fledged" state without any further delay.

Mr Kejriwal had staged hunger strikes earlier as an anti-corruption activist before the formation of Aam Aadmi Party (AAP), and this will be first such stir after becoming chief minister of Delhi in 2015.

The decision comes after the Supreme Court said last week that the centre and not the Delhi government, had the power to order investigations against corrupt officers in the capital, in a huge blow to AAP government.

The top court also left the decision on who controls Delhi officers to a higher bench following a split verdict between two judges.

Addressing the centre and state governments, which have fought bitterly for the last four years, the court said "mutual cooperation is essential" to serve people.

Delhi is not a full state, so the city government has limited powers. The centre has jurisdiction over land, law and order and police. In 2016, the Delhi High Court said as Delhi was a Union Territory, its powers were with the centre and not the city government. The AAP government challenged the order.

In July, a five-judge constitution bench ruled that Delhi cannot be accorded the status of a state, but the Lieutenant-Governor has no "independent decision-making power" and must act on the "aid and advice" of the elected government.