Arvind Kejriwal, Manish Sisodia Won't Have To Appear In Court For Defamation Case 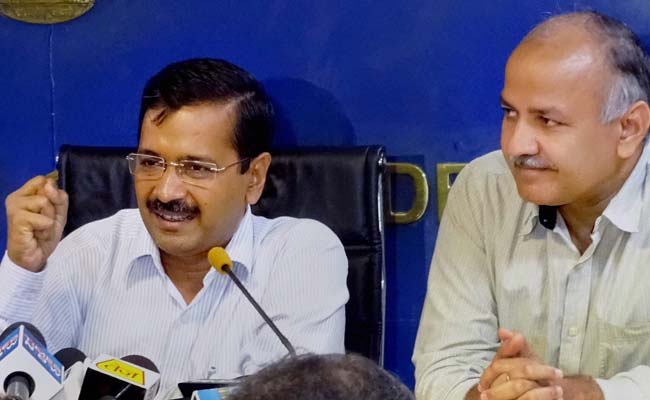 "Let the proceedings before the trial court go on.

"I am giving relief that they (Mr Kejriwal and Mr Sisodia) are exempted from appearing in person before the trial court on April 6," the court said.

It said that the two will file an exemption application through their counsel before the trial court, which should be decided as per law.

The court direction was issued during hearing of a petition filed by the two AAP leaders, who sought quashing of the criminal defamation complaint filed by advocate Surender Kumar Sharma. The two also sought a stay on the proceedings before the trial court, which is yet to frame issue in the matter.

The leaders contended that the order of the trial court summoning them was "erroneous". They also said that a false complaint has been filed against the Chief Minister and his deputy. The high court today issued notice to complainant Mr Sharma in the matter and asked him to file his response by July 28. It also asked the Delhi police to file status report in the matter.

Besides Mr Kejriwal and Mr Sisodia, the complainant has also named Yogendra Yadav in his complaint.

Mr Yadav was a member of the national executive of the AAP until 2015 when he was expelled for alleged anti-party activities. Later, he floated his own party Swaraj India -- which is going to contest MCD elections in Delhi.

Mr Sharma had alleged that in 2013 he was approached by AAP volunteers who had asked him to contest the Delhi Assembly elections on a party ticket, saying Mr Kejriwal was pleased with his social services.

He filled up the application form to contest the polls after being told by Mr Sisodia and Mr Yadav that AAP's political affairs committee had decided to give him the ticket.

However, it was later denied to him.

On October 14, 2013 the complainant claimed, articles in leading newspapers carried "defamatory, unlawful and derogatory words used by the accused persons" which have lowered his reputation in the Bar and the society.

"Kejriwal did not issue any press release against Sharma. The party had issued the press release. So no defamation case made out against Kejriwal," the counsel for the two submitted.
On the basis of the complaint, the trial court had sought their presence before it in the matter.

It, however, had granted bail to Mr Kejriwal, Mr Sisodia and Mr Yadav, after they had appeared before it in pursuance to summonses against them.

While issuing summonses against AAP leaders, the trial court had said, "The press release published in newspapers as well as testimonies of witnesses reflect that defamatory remarks were published in the newspaper which affected the reputation of  the complainant in the society and lowered his reputation in the eyes of other members of the society."
Comments
Manish SisodiaArvind KejriwalI S MehtaAAPDefamation caseDefamation Case Against Arvind KejriwalYogendra YadavSurender Kumar Sharma