Arvind Kejriwal Carpools With Colleagues On Day 1 Of Odd-Even

Arvind Kejriwal, who appealed to the people in Delhi to share rides amid rise in air pollution, left from his home with the two state ministers in an even-number vehicle. 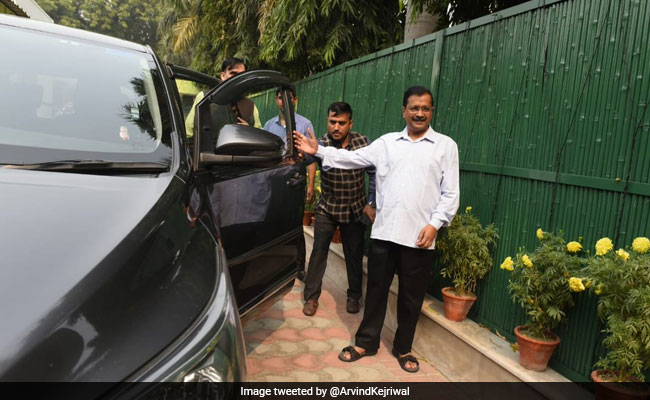 Delhi Chief Arvind Kejriwal shared a car ride with his cabinet colleagues Satyendar Jain and Gopal Rai this morning as the odd-even traffic rationing scheme kicked in today in the national capital.

Mr Kejriwal, who appealed to the people in Delhi to share rides amid rise in air pollution, left from his home with the two state ministers in an even-number vehicle.

"If there were 30 lakh vehicles on Delhi road every day, these will be reduced to 15 lakh now.... it naturally will lead to a reduction in pollution," Mr Kejriwal said.

By sharing rides, the national capital "will be able to defeat pollution", Mr Rai said, adding that the opposition leaders should not make fun of Aam Aadmi Party government's traffic rationing scheme. "We will defeat pollution same as we defeated Dengue. BJP leader Vijay Goel making fun of the scheme is equivalent to making fun of Delhi citizen's right to live," the state minister was quoted as saying by news agency ANI.

Earlier today, Deputy Chief Minister Manish Sisodia was seen riding a bicycle to work as he said the state government's scheme is for "everybody's benefit". "North India has been engulfed in smoke caused by stubble burning, right now we can't do anything about that, but if we follow the scheme for next 10 days, it will give some relief. It is for everybody's benefit," he told ANI.

The odd-even scheme is a traffic rationing measure under which private vehicles with registration numbers ending with an odd digit will be allowed on roads on odd dates and those with an even digit on even dates. Around 200 teams of traffic police have been deployed to ensure compliance and around 5,000 civil defence volunteers have been trained to spread awareness.

Despite emergency control measures kicking in on Friday, pollution levels peaked to a three-year high in Delhi on Sunday that made breathing difficult and lowered visibility that affected road and air traffic. Chief Minister Arvind Kejriwal issued a fresh appeal asking residents to follow the traffic rationing scheme.