The All Arunachal Pradesh Students' Union or AAPSU blamed the centre its "failure in protecting" the state from "foreign incursion". 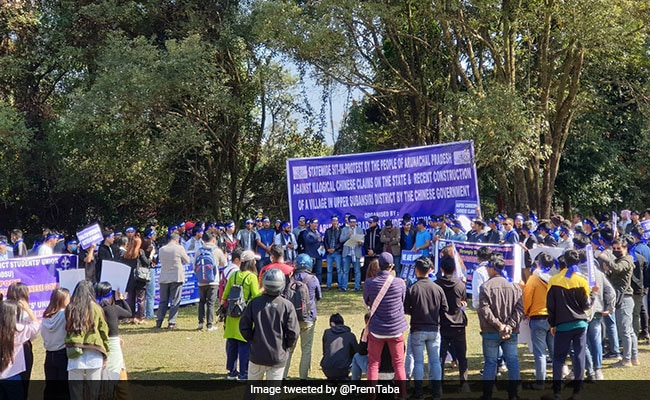 The All Arunachal Pradesh Students' Union (AAPSU) on Thursday launched a state-wide protest against China for establishing a village in the Upper Subansiri district, first reported by NDTV earlier this month.

The influential students' group along with 16 of its units and community-based organisation staged a sit-in at Indira Gandhi Park in state capital Itanagar. In Daporijo, the district headquarters of Upper Subansiri, the local students' union organised a massive demonstration as well.

Students and youth activists called on the centre to "act tough" on the issue and demanded a clarification from the government on Chinese activities near the McMahon Line, the stipulated border between India and China in Arunachal Pradesh that is disputed by Beijing.

Speaking to reporters, AAPSU president Hawa Bagang blamed the centre for its "failure in protecting" the state from "foreign incursion".

"The AAPSU is ready to fight against the Chinese military if the central government authorises," Mr Bagang said, urging MPs from the state to be vocal on such matters, concerning the interest of Arunachal Pradesh and its people.

The people of the state are frustrated against the lackadaisical attitude of the centre towards such serious issues, AAPSU general secretary Tobom Dai said.

Slamming the centre for staying "silent" over the issue, protesters at Upper Subansiri also said the district does not have any good road, which was brought to the notice of Union Minister Kiren Rijiju, but to no avail.

"A shorter road from Mebigeko in Upper Subansiri to Gerukamukh in Assam was proposed and the government was requested many times to construct it. It is not only important in defence strategy but also for public welfare. However, there is no sign of government response," said Yade Natam, President of the All Upper Subansiri District Students Union.

On January 22, similar protests had taken place in Daporijo, after NDTV's expose of China constructing a whole new village on territory that India claims as part of Arunachal Pradesh even though China has had the area under its control since the 1950s.

Satellite images accessed by NDTV showed that China had constructed the new village, around 4.5 kilometres inside the Indian side. The village consists of about 101 homes, the satellite photographs showed.