The bridge on the Daporijo River in Arunachal Pradesh is a strategic link towards the Line of Actual Control or LAC between India and China. 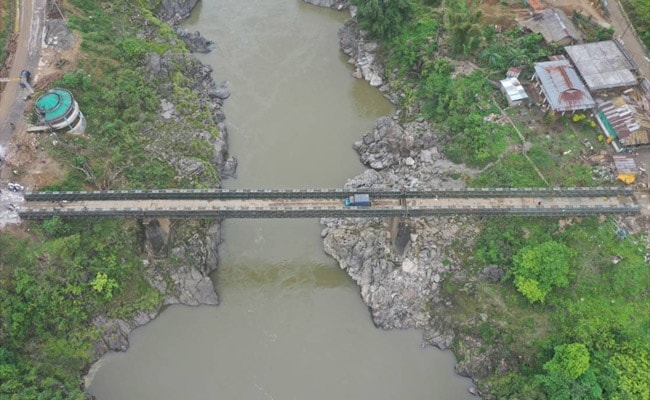 The reconstruction work was done by the Border Road Organization (BRO).

With much of the country at a standstill for the COVID-19 lockdown, India has revamped a strategic bridge close to the China border in record time which will ensure faster movement of troops and also supplies for people living in remote areas.

The new bridge built on River Subansiri at Daporijo in Upper Subansiri district of Arunachal Pradesh has been named after Ashok Chakra recipient Hangpam Dada, a brave soldier of the Indian Army who died fighting terrorists in Jammu and Kashmir. The revamped bridge was inaugurated on Monday by Arunachal Pradesh Chief Minister Pema Khandu via video conferencing.

Over the years, the bridge had fallen in disrepair and movement of vehicles over it was restricted owing to a huge risk of it collapsing anytime. This bridge is the only line of communication to Daporijo and other villages located on the other side of the Subansiri River. It also connects the Siang belt with Upper Subansiri.

The bridge on the Daporijo River is a strategic link towards the Line of Actual Control or LAC between India and China. All supplies, rations, constructional material and medicines pass over this bridge. The old bridge had developed cracks which could lead to a major catastrophe like the one in 1992 when a bus fell off the bridge leaving no survivors. The difficult and dangerous overhaul was completed in record time adhering to all COVID-19 precautions by the Border Roads Organization (BRO).

"Now that this strategic 430 feet multi-span bridge is completed, hassle-free communication is restored to Daporijo and around 451 villages as well as all the forward locations along LAC where our security forces are deployed," Chief Minister Pema Khandu said.

The state government had taken up the issue of reconstruction of the bridge with the Government of India. The reconstruction work was subsequently entrusted to the Border Road Organization (BRO) under Project ARUNANK, which after taking over from state Public Works Department started works from March 17, 2020

Praising the BRO, Mr Khandu said despite various problems faced due to national lockdown, the organisation took up the construction work at war-footing and within a short period of around one month completed the project.