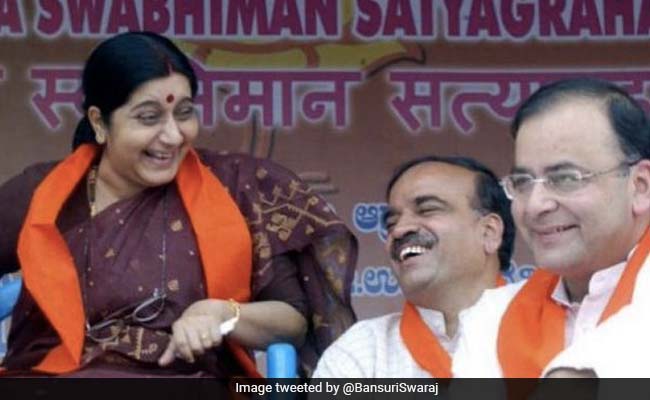 Arun Jaitley's first death anniversary: Bansuri Swaraj, daughter of former external affairs minister, Sushma Swaraj today wrote a touching message on social media remembering Arun Jaitley, on his first death anniversary. "My tribute to Arun Jaitley ji - a visionary leader, economic reformist, distinguished parliamentarian and a formidable lawyer. You and Ma must be watching over us while sharing a hot cup of coffee," Bansuri Swaraj posted on Twitter, with a picture of both the veteran BJP leaders and Anant Kumar sharing on what seems like a funny moment.

Sushma Swaraj and Arun Jaitley, the two senior ministers, died within weeks of each other in August last year. Both were in their 60s.

My tribute to Shri @arunjaitley ji - a visionary leader, economic reformist, distinguished parliamentarian and a formidable lawyer.
You and Ma must be watching over us while sharing a hot cup of coffee.#arunjaitleypic.twitter.com/nIb9fXrkeo

Bansuri Swaraj, who is quite active on Twitter, had written a poignant message on her mother's first death anniversary on August 6. "Ma, you are always with me as my strength. Krishna look after my mother!" She had posted.

The BJP paid rich tributes to Arun Jaitley, with Prime Minister Narendra Modi saying that he "misses his friend a lot" and that his late Cabinet colleague diligently served India. Top BJP leaders, including Home Minister Amit Shah, Defence Minister Rajnath Singh and party president JP Nadda, fondly remembered Mr Jaitley, who was the voice of the party on various issues for decades and was seen as its main trouble shooter.

Remembering Mr Jaitley, Amit Shah said he was an outstanding politician, prolific orator and a great human being who had "no parallels" in Indian polity. Defence Minister Rajnath Singh tweeted, "Remembering Arun Jaitley ji on his punyatithi. Jaitley ji was a stalwart who made a big contribution towards BJP's growth and rise to power."

A key BJP leader and a crucial member of the party, Arun Jaitley was a champion of the party's policies and ideology. His affable personality won him friends across the political spectrum.