The 1982 work became the most expensive painting by Mr Khakhar, leaving behind his "De-luxe Tailors" (1972) that sold for Rs 9.71 crore at the Sotheby's auction of Howard Hodgkin's collection in 2017. 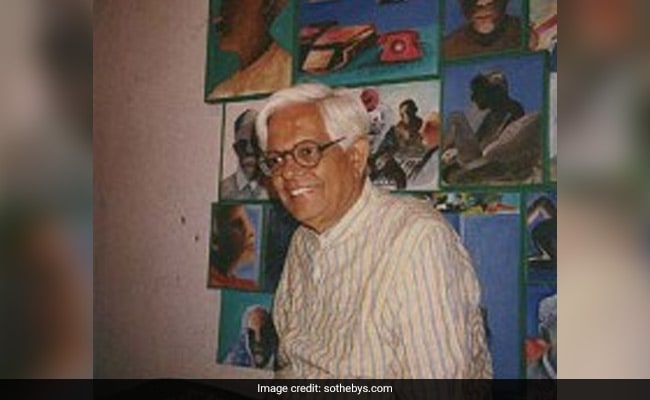 The 1982 work became the most expensive painting by Mr Khakhar, leaving behind his "De-luxe Tailors" (1972) that sold for Rs 9.71 crore at the Sotheby's auction of Howard Hodgkin's collection in 2017.

In 1986, with the unveiling of "Two Men in Benares" in Mumbai, Mr Khakhar became the first Indian artist to freely disclose his sexual orientation through his work.

Mr Khakhar's painting was among the 29 works of 20th century Indian art that went under the hammer from the private collection of Swiss collectors Guy and Helen Barbier at the sale that realised a combined total of Rs 66.23 crore.

The auction house said it was the "highest total achieved in a decade for a sale of this kind at Sotheby's in London".

MF Husain's "Marathi Woman" (1950) quadrupled its pre-sale estimate to sell for Rs 3.84 crore; a rare untitled figurative work by Ram Kumar, painted as a present for his wife in 1953, sold for Rs 4.58 crore, doubling its higher pre-sale estimate of Rs 2.47 crore, and "Anatomy of that Old Story" (1970) from Rameshwar Broota's Ape series also quadrupled its estimate to make Rs 3.73 crore.

"These exceptional results are a fitting tribute to the pioneering spirit of Guy and Helen Barbier, who passionately sought out exceptional examples of Indian art at a time when few others thought to," Ishrat Kanga, head of sale, said.