The army chief was also informed about the measures in hinterland in the Corps' area of responsibility towards ensuring peace and stability. 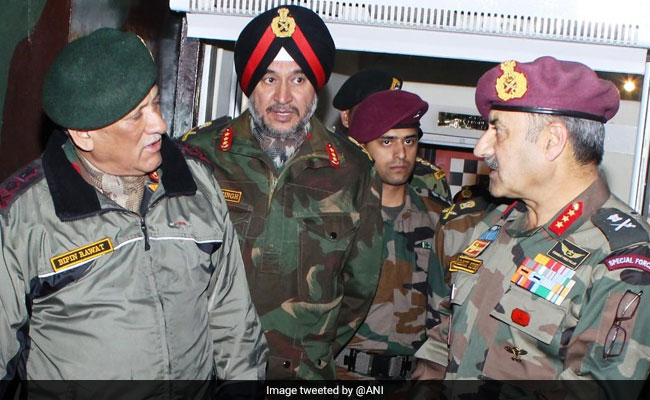 According to a defence statement, Gen. Rawat, accompanied by Northern Command chief, Lt Gen Ranbir Singh, visited the Nagrota-based White Knight Corps to review the operational preparedness of the forces in view of the current situation along the LoC and the IB.

"During the visit to the Corps Headquarters, the COAS was briefed and updated by Lt Gen Paramjit Singh, GOC, White Knight Corps about the current operational situation, prevailing security scenario and the preparedness of the formation.

"The COAS was also briefed on the actions taken to meet the challenges of increased ceasefire violations and measures put in place to thwart the nefarious designs of the adversary," it said.

The army chief was also informed about the measures in hinterland in the Corps' area of responsibility towards ensuring peace and stability.

Commending all soldiers for their unwavering dedication to duty, selfless devotion and high standard of professionalism, the Army chief expressed appreciation of the measures and standard operating procedures instituted by the units and formations in the Corps Zone to minimise casualties due to ceasefire violations and infiltration bids, the statement said.

Gen Rawat also stressed the need for them to be prepared for effectively meeting current emerging security challenges, and to remain vigilant to counter the nefarious designs of the enemy and anti-national elements, it added.