Rahul Gandhi met a group of students at a restaurant in Delhi as part of an outreach programme ahead of elections.

Rahul Gandhi met a group of students last week at a restaurant in Delhi.

When 20-year-old Pratishtha Deveshwar was invited to join six other students from around the country to meet a "senior Congress leader" over dinner, she had little idea that it would turn out to be party chief Rahul Gandhi himself.

A student from Delhi's Lady Shri Ram College, Pratishtha was among the students featured on the first episode of "Apni Baat Rahul Ke Saath" - the Congress president's answer to Prime Minister Narendra Modi's "Mann Ki Baat", though more on the lines of "dinner with Rahul". 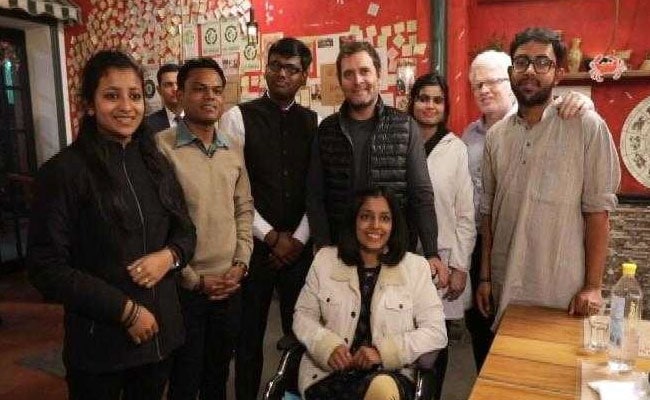 The video campaign was unveiled by the Congress on social media on Tuesday. But how much of it was scripted? "Not at all. We were told just be yourself, talk about everything you want to... It was not scripted. It was all very spontaneous, very candid, very real," Pratishtha said on NDTV's Good Morning India.

And how did she find Rahul Gandhi? "Charming and very thoughtful in his answers. He did not give superficial answers. There were moments when he actually admitted that for example disability is an issue that politicians have ignored for a long time," she said.

"I have met a few politicians before Mr Gandhi and they have this 'I know everything attitude'. Mr Gandhi did not have that. He was open to discussion, open to learning what each on the table had to say," Pratishtha added.

Pratishtha, who spoke to Mr Gandhi at length about people with disabilities and her concerns about being able to vote from a wheelchair, already knows which political leader she wants to meet next. "Mr (Narendra) Modi. Because then you can compare and see who is better this is the first time I am going to vote in 2019 elections. That will help me make up my mind," she said.