Anna Hazare Hunger Strike: Apart from the appointment of Lokpal at the national level and Lokayukta in states, Anna Hazare had demanded the implementation of the Swaminathan Commission recommendations. 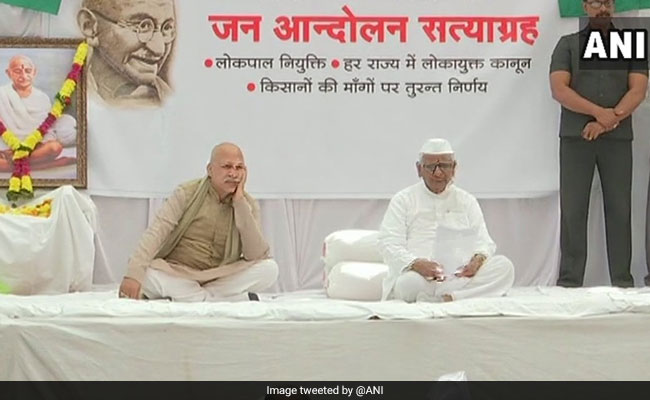 Anna Hazare has begun his hunger strike near the Yadavbaba Temple in his village, Ralegan Siddhi

Social activist Anna Hazare began a hunger strike today over the "non-fulfilment" of assurances by the Centre and the Maharashtra government on the appointment of Lokpal and passage of the Lokayukta Act in the state. Anna Hazare offered prayers at the Padmavati Temple in his village, Ralegan Siddhi, in Maharashtra's Ahmednagar district this morning. He then went in a procession, accompanied by students, youths and farmers, to the Yadavbaba Temple and sat near it to begin his hunger strike.

The anti-corruption crusader told news agency Press Trust of India that he welcomed the Maharashtra Cabinet's decision to bring the office of state chief minister under the jurisdiction of Lokayukta.

"However, the strike will continue till the government fulfils the promises they made before coming to power about passage of Lokayukta Act, appointment of Lokpal, and to tackle farmers' issues," he said.

As a routine procedure, doctors conducted a basic health check-up of Anna Hazare, a close aide of the activist said.

"Anna Hazare has now begun his fast as he is disappointed with the state government for not appointing the Lokayukta," the aide said. Mr Hazare had written a letter to Chief Minister Devendra Fadnavis on Monday, saying he would launch the agitation in his village from today.

Maharashtra minister Girish Mahajan, who has been acting as an emissary between the government and Anna Hazare, on Tuesday urged the activist to cancel the agitation, claiming that almost all the demands made by him were fulfilled.

"His first demand was implementing Swaminathan Commission recommendations, that farmers should get 1.5 times the MSP (Minimum Support Price). I think that demand has been fulfilled," Mr Mahajan told reporters in Mumbai.

Anna Hazare, however, said he would not call off the agitation till the Lokayukta Act becomes a reality.

Apart from the appointment of Lokpal at the national level and Lokayukta in states, Anna Hazare had demanded the implementation of the Swaminathan Commission recommendations.

"It has been five years since the Lokpal Act was passed. Yet the Narendra Modi government has not appointed Lokpal...Lokayukta Act has not been passed in Maharashtra for four years," Anna Hazare wrote in his letter dated January 28.

The activist said that the chief minister had mediated when he had launched the agitation at Ramlila Maidan in Delhi in March last year. He said he had withdrawn that agitation after the central government had assured in writing that it would fulfil the demands.

"Nine months have passed, yet the demands have not been fulfilled. Hence, I will be on hunger strike in my village Ralegan Siddhi on January 30," he had said in the letter.

The Devendra Fadnavis Cabinet had on Tuesday decided to bring the office of the chief minister of Maharashtra under the jurisdiction of Lokayukta.

Anna Hazare had welcomed the government's decision to set rolling the process to appoint Lokayukta. "I thank them on behalf of the people for taking the decision towards appointment of Lokayukta through a constitutional process. But, that does not mean I will not stage hunger strike. The agitation will go on until the Act is in place," he had said.

Maharashtra Not Cooperating In Probe Against Anil Deshmukh: CBI