At the time the Speaker was adjourning proceedings, Naramalli Sivaprasad switched on an audio device that played a famous Tamil film song of MGR, who was also an actor. 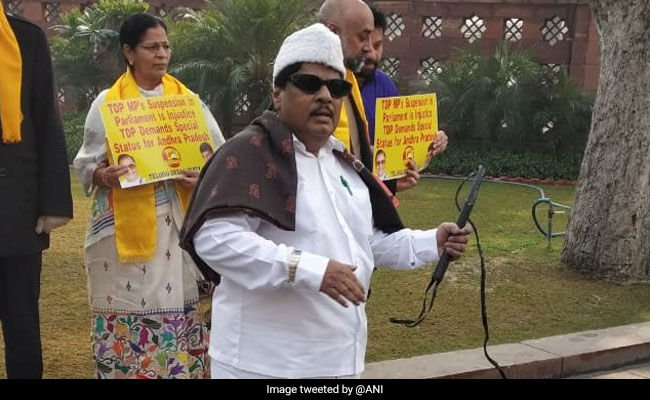 A Telugu Desam Party (TDP) member struck an unusual note in the Lok Sabha on Monday when he played a Tamil song in the House.

Naramalli Sivaprasad, known for sporting different costumes in the House, was dressed like former Tamil Nadu chief minister MG Ramachandran, or MGR, and held a whip in his hand.

Later, during the Zero Hour, he was suspended from the House along with three other members for continuing to disrupt the proceedings.

During the Question Hour, he walked into the Well and sought to flog himself with the whip.

As members from other parties continued with their protests, Speaker Sumitra Mahajan adjourned the House till noon.

At the time the Speaker was adjourning proceedings, Mr Sivaprasad switched on an audio device that played a famous Tamil film song of MGR, who was also an actor.

After the proceedings were adjourned, some members were seen chatting with Mr Sivaprasad while BJP member Anurag Thakur switched off the audio player.

Soon after the proceedings were adjourned again till 12.30 hours, Mr Sivaprasad was seen having a word with Samajwadi Party patriarch Mulayam Singh Yadav and Congress leader Mallikarjun Kharge.

The TDP has been demanding a special status for Andhra Pradesh. Many of the party's MPs were suspended from the House last week for unruly behaviour.