MLA Amit Shah, With Wife And Son, Gets Big Welcome On Return To Gujarat Assembly BJP President Amit Shah, a Gujarat legislator, given a grand welcome on his return to the Assembly

Gandhinagar: Amit Shah, Gujarat legislator, arrived at the state assembly in Gandhinagar on Thursday morning to a huge welcome from hundreds of BJP workers and also MLAs and ministers. The BJP chief, who is the party MLA from the Naranpura constituency, is attending an assembly session after two years. Mr Shah had last attended a session in March, 2015.

The BJP chief was accompanied by his wife and son. Among those who greeted him with flowers was the BJP's state chief Jitu Vaghani and Chief Minister Vijay Rupani.

Amit Shah is on a two-day visit to his home state to take stock of preparations for state elections later this year and is holding multiple meetings with top party leaders in the state. 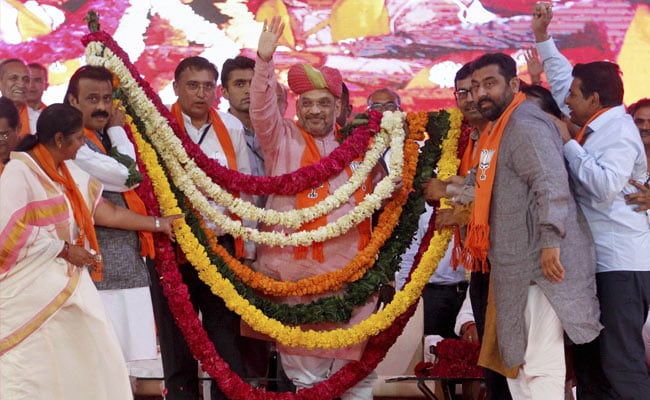 At a big reception hosted yesterday by the party to felicitate Mr Shah for the BJP's enormous victory in Uttar Pradesh, he ruled out calling early elections in the state by saying that Prime Minister Narendra Modi's "victory chariot" would roll into Gujarat in November. Elections are due in Gujarat in November end.

He has set the state leaders a target of winning 150 of Gujarat's 182 assembly seats, demanding a repeat of UP, where the party has won over 300 seats as it had pledged, he said.

The BJP has ruled Gujarat for the last two decades decimating chief rival Congress, but this year it faces its toughest battle in years. With Prime Minister Narendra Modi - whose 13-year stint as Gujarat chief minister was the party's golden period in the state - moving to Delhi after the 2014 national election, the BJP lost its momentum under his successor Anandiben Patel.

She was seen to mishandle the massive agitation for reservation in government jobs and colleges by the powerful Patel community and finally resigned last year citing old age. Vijay Rupani, seen as an Amit Shah man, was given the tough charge of leading the party to this year's election.

The BJP also fears an anti-incumbency sentiment, and is expected to build its campaign in Gujarat around the popularity of PM Modi as it did in UP. The talk of early elections in Gujarat had begun as suggestions were made that the party could cash in on the UP wave.
Comments
Amit ShahGujarat AssemblyAmit Shah Gujarat AssemblyGujarat Elections 2017Gujarat Assembly PollsGujarat Assembly Elections