The BJP had set up a committee comprising Rajnath Singh and M Venkaiah Naidu and Arun Jaitley, who is currently abroad, to consult other political parties. 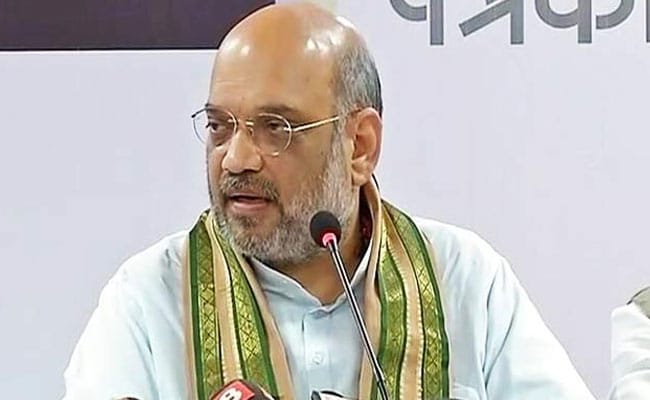 Presidential elections: Amit Shah made it clear that the NDA would decide the names on its own.

New Delhi: Signalling that the Congress and the Left may have lost its opportunity to suggest names for the presidential elections, BJP president Amit Shah has dismissed opposition complaints that its two union ministers - Rajnath Singh and M Venkaiah Naidu - did not go to them with any specific names.  Mr Shah made it clear that the NDA would decide the names on its own.

If they had, Mr Shah said, the parties would have complained that the government had already made up its mind. "We went to seek their suggestions. Now if you don't want to give (a suggestion), then we will go to them after taking a decision," the BJP president told reporters in Mumbai on Saturday.

The BJP had set up a committee comprising Mr Naidu, Mr Singh and Arun Jaitley, who is currently abroad, to consult other political parties. On Friday, the panel met Congress chief Sonia Gandhi and Left leader Sitaram Yechury among others.

Senior Congress leader Mallikarjun Kharge later told reporters that there was no question of consensus "when they have not given any names". "We asked if they have a candidate. We have many names," Mr Yechury said.

"Is it better to seek their suggestions and then decide, or decide first and then ask for suggestions? he asked, rhetorically.

But the BJP president made it clear that the party would hold another round of consultations with opposition parties; this time the committee would "go back to them with a name". It is not clear when this round of discussions would take place.

President Pranab Mukherjee's five-year term expires on July 24. The BJP-led NDA is expected to get its candidate's nomination papers filed before Prime Minister Narendra Modi leaves for the US on June 24.

In Maharashtra as part of his 90-day effort to boost the party's presence across the country, Mr Shah will be meeting Uddhav Thackrey of the Shiv Sena on Sunday to formally hold consultations with its ally on the presidential candidate.

Promoted
Listen to the latest songs, only on JioSaavn.com
In recent days, the Shiv Sena indicated that it might vote "independently" and said it would support RSS Chief Mohan Bhagwat and eminent agricultural scientist MS Swaminathan for the top constitutional post. On Friday, Foreign Minister Sushma Swaraj too had ruled herself out of the race, calling reports that she might be elevated to Rashtrapati Bhavan as "rumours". Earlier, Mr Bhagwat and had denied that he was in the race.