West Bengal Election: Mamata Banerjee's party claimed that Amit Shah's Monday rally in Jhargram district was cancelled not for any technical snag, but due to poor attendance. 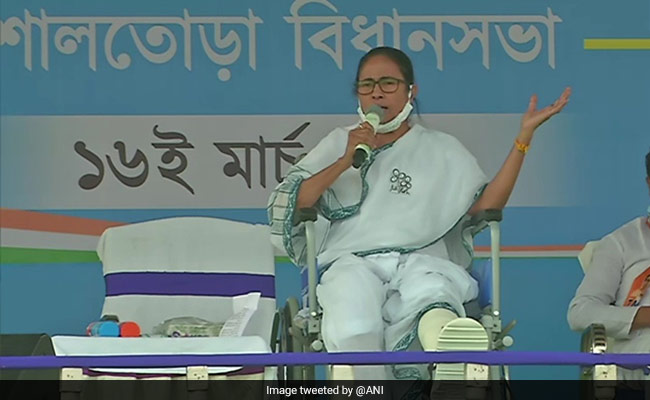 Bengal Election: Mamata Banerjee questioned if the Election Commission has lost its independence

Bengal Chief Minister Mamata Banerjee upped her attack on the BJP today, questioning if the Election Commission's move to remove her security in-charge was part of a conspiracy to kill her. Pointing a finger at Union home minister Amit Shah, who has been behind the BJP surge in Bengal, she said, "Will the Union home minister run the country or hatch conspiracy to harass us in Bengal? Is the BJP hatching conspiracy to kill me? They (the Election Commission) have even removed my director of security".

"What does Amit Shah think of himself? You will use brute force to shut everything? You can't get crowds to your meeting, that's why you are using force. You are creating conspiracies. You don't allow the press to speak. You have shut their mouths," Ms Banerjee said at an election rally in Bankura district's Mejia, which she addressed from her wheelchair.

The Chief Minister's Trinamool Congress party has claimed that Mr Shah's rally yesterday in Jhargram district was cancelled not for any technical snag, but due to poor attendance.

"Will the Home Minister run the country or is he sitting in Kolkata and hatching conspiracies? Where someone will be arrested, where someone will be beaten or where agencies will get behind people? Industrialists are being raided and now even the Home Secretary has been raided. I want to ask the Election Commission to look into this. Why are government officers being harassed during elections? Why are political people being harassed? Those who led the farmers' agitation in Nandigram are being issued warrants. Will everyone who took part in Nandigram and Singur agitations face notices?" she said in one of her sharpest attacks on the home minister.

The Chief Minister also questioned if the Election Commission has lost its independence.

"I am asking with respect to the Election Commission. Who is running the Election Commission? Amit Shah, are you running it? This is a question I have. We want a free and fair election but who is Amit Shah? Who is he to guide the election commission? He is interfering in the day to day work of the commission. And this is working against us. My security in-charge has also been removed. What do they want? Do they want to kill me?," she said.

The Commission had rejected the Trinamool Congress's claim that an attempt was made on her life after it replaced the state police.
The Commission said the Chief Minister had met with an accident and held Mr Sahay responsible for the violation of her Z-Plus security protocol. Mamata Banerjee's bullet-proof car was occupied by the security in-charge, the Commission had said.

Since yesterday, Ms Banerjee has been focussing on the districts in the western part of the state – once the hotbed of Maoists – where her arch-enemy Suvendu Adhikari can influence the results on around 30 seats.