These vans are equipped with a machine that can conduct 39 tests, including those for diabetes, with blood samples in one go, an official said. 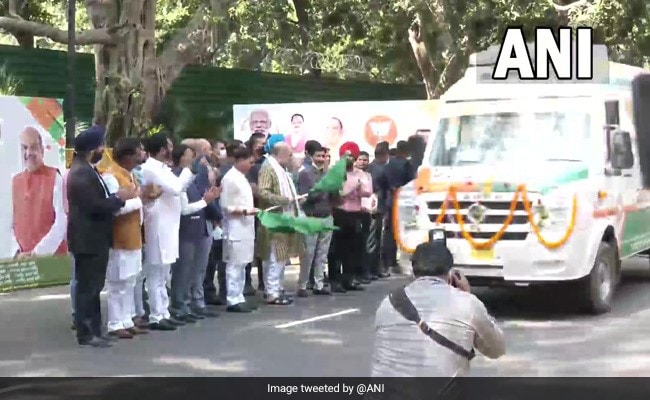 The "Modi Vans" will release a weekly medical bulletin, the official said

Union Home Minister Amit Shah on Tuesday flagged off "Modi Vans" under the BJP's "seva hi sangathan" programme to mark Prime Minister Narendra Modi's 20 years as the head of a government, including over 13 years as Gujarat chief minister.

These vans are equipped with a machine that can conduct 39 tests, including those for diabetes, with blood samples in one go. The van will also release a weekly medical bulletin, Vinod Sonkar said.

He added that besides providing health facilities these vans will also help in the registration of beneficiaries under different central schemes.

Through these vans, people will get prescriptions to help them avail telemedicine services and services of BJP-associated health volunteers in villages, Mr Sonkar said.

These vans also have a 32-inch television and high-speed internet service, and will broadcast the Prime Minister's monthly radio broadcast "Mann Ki Baat", he said.