Nipah Virus: Kerala, which also saw a localised outbreak of 63 cases of Zika virus in July, already has preventive measures in place like use of masks and PPE kits due to the rising COVID-19 cases. 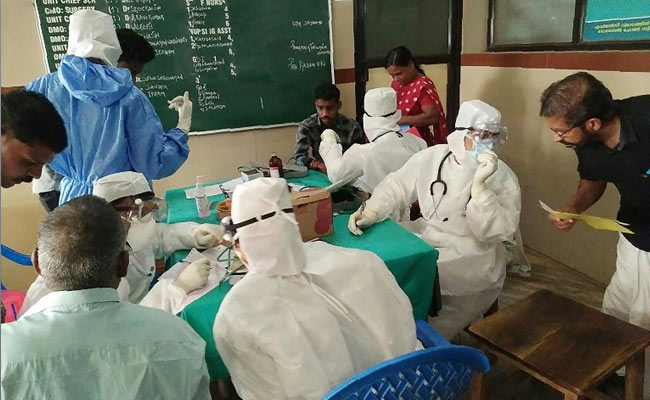 As Kerala reeled under a daily increase of nearly 30,000 cases of COVID-19, the deadly Nipah virus has come as another thorn in its side, prompting the state to further heighten the alertness of its health machinery to prevent an outbreak of a different infection.

The southern state, which already saw a localised outbreak of 63 cases of Zika virus in July that were mostly confined to Thiruvananthapuram, however, need not be concerned about the spread of Nipah infection as preventive measures like use of masks and PPE kits -- are already in place due to COVID-19 and intensive contact tracing was going on, state health minister Veena George said on Sunday.

Meanwhile, the central government has rushed a team from the National Centre for Disease Control (NCDC) to provide support to the state, where a 12 year-old boy died due to Nipah on Sunday and two others displayed symptoms of the virus infection.

However, experts, like Dr Amar Fettle, Dr TS Anish and Dr TN Suresh, said that there was less cause for concern at present as the state has already dealt with the Nipah virus twice in the past -- when it reared its head in 2018 and 2019 -- and the risk of transmission would be less this time round as protective measures, like wearing of masks and PPE kits, are already in place.

They also said that Nipah infections are usually confined to small clusters or areas.

The experts said that "intensive contact tracing" and quarantine of all primary contacts were the two main steps to be taken to ensure effective control over spread of the infection.

Dr Fettle, the nodal officer for H1N1, said that the Nipah infection is very pathogenic, but it is more likely to spread once the patient's condition becomes severe -- when they are hospitalised.

He said that risk of the infection spreading would, therefore, be higher in the hospital than at community level.

Hence, while doing contact tracing, people who may have come into contact with the patient at the hospitals should be "meticulously traced", he said.

He said that steps taken by the state to tackle COVID-19, like preparing a time stamped route map of patients, would come in handy here also as it would help public health authorities inform people about the places visited by the infected person and at what times.

This will let people know as to who all need to quarantine themselves or come forward for testing if they exhibit symptoms and would avoid widespread panic in the district or state, he said.

Dr Anish, a specialist in Community medicine, and Dr Suresh, general secretary of the Kerala Government Medical Officers Association, were also of a similar view that contact tracing and quarantine of primary contacts were the two most important steps presently.

Dr Anish said that Nipah usually remains confined to smaller areas or clusters and its numbers remain very few and hardly ever crosses even 50.

Dr Suresh said that the state has already dealt with the virus twice in the past and therefore, it already has a model in place to "effectively" tackle it.

Moreover, due to the prevailing COVID-19 pandemic, people are already taking preventive steps like wearing masks and kits, and therefore, the spread of Nipah may be less.

Also, due to COVID-19, the victim's list of contacts would be limited, he said and added that local containment activities are already in motion.

He said the primary contacts would be kept in quarantine and if they display symptoms, they would be tested. Subsequently, based on the results, supportive medical care would be provided.

All of the experts said that supportive care was the only mode of treatment as there is no cure or vaccine for Nipah.

They also said that the likelihood of both Nipah and COVID-19 infecting patients was less.

The state health minister, earlier in the day, told the media that information regarding the infection status of the boy was received late, but as soon as they got to know about it, the department swung into action and held an emergency meeting Saturday night itself to formulate an action plan.

She said that a special team was formed on that night to carry out contact tracing and identify primary contacts and it was effectively carrying out that work.

Preparations have been made to isolate or quarantine those in the primary contacts list and subsequently, after another meeting at Kozhikode Medical College, a treatment protocol would be decided, the minister said.

Later in the day, she said that two more people have displayed symptoms of Nipah infection and were being monitored.

The two, both health workers in the hospitals where the victim was taken, are among the 20 high risk contacts of the 12-year-old child, she said.

The nearby districts of Kannur and Malappuram have also been directed to be on the alert for any cases of Nipah, she had said earlier.

The Minister had also said that it was being examined why the case was again reported in Kozhikode as had happened in 2018 when the first infection was recorded in the same district.

The first Nipah virus disease outbreak in South India was reported from Kozhikode district in Kerala on May 19, 2018. There have been 17 deaths and 18 confirmed cases as of June 1, 2018.

The outbreak was contained and declared over by June 10, 2018.

Thereafter, in June 2019, a new case of Nipah was reported from Kochi and the sole patient was a 23-year-old student, who later recovered.

With this year's reporting of a case, it is the fifth time the virus has been detected in India and the third in Kerala.