Guwahati: Less than 24 hours after the BJP suffered a political setback in Karnataka, party chief Amit Shah held a meeting of the North East Democratic Alliance (NEDA) --- a coalition of 13 regional parties in the Northeast --- in Guwahati to discuss the roadmap for the 2019 elections in which the BJP is eyeing all 25 seats in the region.

The meeting comes at a time there is tremendous resentment in Assam and Meghalaya over a proposed law that aims at giving citizenship to illegal migrants belonging to religious minorities from Bangladesh, Pakistan and Afghanistan --- a promise made by Narendra Modi in the run-up to the 2014 general elections.

Protesters carrying black flags lined the streets of Guwahati, shouting slogans against the BJP for pushing the Citizenship Amendment Bill 2016.

Illegal migration, especially from Bangladesh, is a highly contentious issue in Assam. The issue had sparked violent protests in the late 1970s and early 1980s after which the Assam Accord was signed in 1985 that says all foreigners who entered the state after 1971 would be deported.

The Citizenship Amendment Bill 2016 allows Hindus, Sikhs, Buddhists, Jains, Parsis or Christians from Afghanistan, Bangladesh or Pakistan to be eligible for Indian citizenship after a stay of six years. 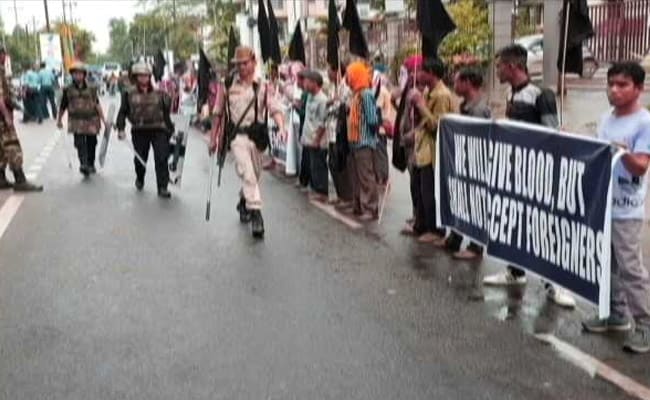 Protest in Guwahati over proposed changes to Citizenship Amendment Bill

In his speech, Mr Shah made no mention of the issue but chose to attack earlier Congress governments in the Northeast over corruption.

"The Congress governments in the Northeast were utterly corrupt. The BJP has taken Northeast out of briefcase politics to development politics," he said.

NEDA was formed in 2016 soon after the BJP formed the government in Assam for the first time, dislodging the Congress that was in power for 15 years. Partners in the alliance now rule all states in the Northeast, barring Mizoram where elections are due later this year.

Asom Gana Parishad (AGP), which is part of the ruling coalition in Assam has strongly opposed any change to the citizenship law, even threatening to walk out of the alliance. The party today reiterated it opposition at the meeting.

"Earlier, we had met the Prime minister on this issue. Today, we placed it before the NEDA conclave where Mr Amit Shah was present. He did not say anything in his deliberations, let us see," said AGP president Atul Bora who is also a minister in the Assam government.

The bill is now with a joint parliamentary committee that visited Assam and Meghalaya earlier this month and discuss the issue with various stakeholders.

Meghalaya Chief Minister Conrad Sangma admits there is no unanimity among NEDA partners.

"We are different parties, so there is difference of opinion among us but it's important that on this platform we come to a decision in the interest of the people," he said.

Promoted
Listen to the latest songs, only on JioSaavn.com
Aware of a possible backlash on the issue, the BJP is playing safe for now.

"It is not wise for me to comment before any final decision has been taken," junior home minister Kiren Rijiju told NDTV.