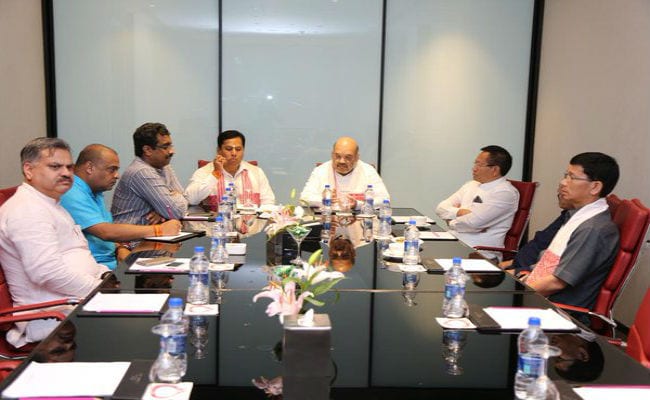 BJP chief Amit Shah chaired the meeting on the North East alliance, also attended by the Chief ministers of the four states. (This image was tweeted by Amit Shah)

Guwahati: Hours after Sarbananda Sonowal took oath as Chief Minister of Assam at a massive victory celebration, BJP chief Amit Shah announced an alliance of non-Congress parties for the development of North Eastern states on Tuesday.

Mr Shah tweeted that the chief ministers of Assam, Arunachal Pradesh, Nagaland and Sikkim have proposed to join the North East Democratic Alliance or NEDA, the main objective of which would be "the all-round development of the North East and better co-ordination among the states and central government."

Himanta Biswa Sarma, newly sworn in as a minister in Assam, would head the alliance, Mr Shah said. Mr Sarma, who is expected to be finance minister in the Assam government, joined the BJP last year after quitting the Congress and added substantial fire-power to the party's campaign in this year's assembly election that it has won, trouncing the Congress which ruled for the last 15 years.

This alliance will be called North East Democratic Alliance.
I congratulate Shri @himantabiswa on being declared as Convenor of NEDA.

In his speech after Mr Sonowal's oath, Prime Minister Narendra Modi set the tone promising that the Centre would extend all assistance to Assam and other north eastern states to ensure their speedy development as part of the Act East Policy. "Assam will be the centre point to bring about effective all-round development of the entire North East and this region will emerge as a powerfully developed part of the country as a part of our Act East Policy," PM Modi said addressing a lakh-strong crowd and asserting that the country's development could not be led only by western states.

Assam is the first North Eastern state that the BJP will govern. Present at its show of strength in Guwahati yesterday, were Kalikho Pul, chief minister of Arunchal Pradesh, whose government the BJP supports, and also the chief ministers of Sikkim Pawan Chamling and Nagaland, TR Zeliang.

The BJP hopes Assam will be its gateway in the North-East where the Congress still runs three governments and the Left a fourth.

The region sends 25 lawmakers to Lok Sabha. The BJP has eight - it had won seven of Assam's 14 seats in 2014 and 1 in Arunachal Pradesh - and hopes to ramp up that number substantially in the next elections.