Coronavirus Arunachal Pradesh: The King Cobra is a protected reptile under the law and killing it is an offence that cannot be granted bail 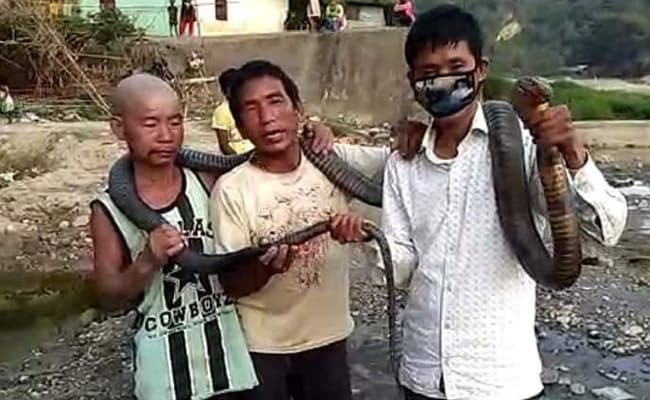 Coronavirus: The hunters in Arunachal Pradesh are heard saying they killed the King Cobra

A group of hunters was seen in a video with a 12-feet-long King Cobra that they killed for a feast in Arunachal Pradesh. In the video that was shared widely on social media, three men are seen with the carcass of the venomous snake slung on their shoulders. They are heard claiming that they killed the reptile in the jungle.

They had made elaborate arrangements for the feast and laid banana leaves to slice and clean the meat.

One of them is heard saying in the video that they have no food left in their granaries because of the lockdown amid the COVID-19 pandemic. The men say they haven't also eaten meat for some time.

"So we went to the jungle looking for something, and found this (the King Cobra)," one of the men said.

However, the Arunachal Pradesh government dismissed the claim saying there was no shortage of rice in the state. "The state has at least three months stock at all places and is providing free ration to those who lost their livelihood," it said in a statement.

https://t.co/MrRL56wpb6
Clarification: There is no shortage of rice in AP. The state has atleast three months stock at all places & is providing free ration to those who lost their livelihood. Around 20000 people have been provided free ration till date. @PemaKhanduBJP@ndtv

A case under the Wildlife Protection Act has been filed against them, officials said, adding the men are on the run.

The King Cobra is a protected reptile under the law and killing it is an offence that cannot be granted bail. Arunachal Pradesh is home to a large number of endangered snake species.

Researchers recently discovered a new species of a venomous snake and named it after JK Rowling's fictional character Salazar Slytherin, co-founder of the Hogwarts School of Witchcraft and Wizardry.

The pit viper was discovered by a team of researchers in the thick evergreen forests of Pakke Tiger Reserve in July 2019 and has been named Trimeresurus Salazar, a Harry Potter character.