Updates on Protests Against Citizenship Act : The administration has relaxed the curfew from 9 am to 4 pm in Assam's Guwahati today.

The administration has relaxed the curfew from 9 am to 4 pm in Assam's Guwahati today.

The administration has relaxed the curfew from 9 am to 4 pm in Assam's Guwahati today. The curfew was put in place in parts of Assam and Meghalaya to avoid any untoward incident in wake of the violent protests against the citizenship law.

News agency PTI reported that the protests showed signs of ebbing away in Assam and elsewhere in the northeast. However, parts of neighbouring West Bengal were in throes of violence as agitators vandalised public property and clashed with police.

There were violent protests in Delhi's Jamia Milia Islamia university, while some other activists also took out a peaceful march towards Jantar Mantar.

Here are the Updates on Protests Against Citizenship Act:

The expressway, which connects Kolkata to NH 6, has been temporarily closed to avoid any untoward incident.

15 Buses were set on fire after de-boarding passengers in Howrah.

Dec 14, 2019 13:57 (IST)
Assam natives protest in Mumbai
People from Assam, living in Mumbai, gathered at the Azad Maidan here on Saturday to protest against the Citizenship (Amendment) Act (CAA).

"The bill has become an act as the parliament has passed it. Assam has a distinct culture. If there is a threat to it, then we will protest against it. Secondly, this act is discriminatory and it will present a threat against the region''s culture. It is clear that the region''s demographics will change," Actor Dipannita Sharma, who was also sitting on protest, told ANI. 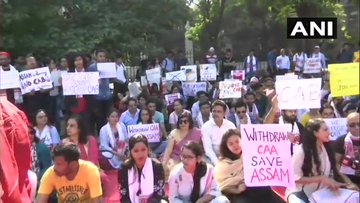 The National Highway 34, one of the arterial roads that connect north and south Bengal, was blocked in Murshidabad. Several other roads in the district were also blocked, they said.

Dec 14, 2019 09:26 (IST)
"Exercise Caution": UK, US Issue Travel Advisories Amid Northeast Violence
As violent protests against the amended Citizenship Act continued in the northeast, the United States and United Kingdom on Friday issued travel advisories asking their citizens to "exercise caution" while travelling to the region for any purpose.

"Demonstrations against the Citizenship Amendment Bill are taking place in some parts of the country. There have been reports of violent protest in Northeast India, especially in Assam and Tripura.
An indefinite curfew has been imposed in Guwahati and mobile internet services have been suspended in 10 districts of Assam," the United Kingdom's advisory read, adding that transport may also be affected in various parts of the region.