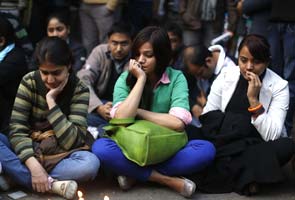 Paris: While the rest of the Paris was in a festive mood to celebrate the coming of the new year, members of the Indian community were lighting candles for a peaceful protest march starting from Maison de L'Inde, the residence of Indian students in Paris.

A group of students will be going to the Indian embassy in Paris to submit a detailed petition for the Indian government, asking for concrete steps to be taken to fight violence against women.

Sudhir Bhatt, a student who led the march said, "We are also Indians. We are sitting here but we are with our brothers and sisters protesting at Jantar Mantar and India gate."

Indians living in Paris are grieving and protesting like many others back home but some say the spotlight is on them and it's making them uncomfortable.

One protester said that ever since this story has been in the headlines, people around her have been asking her, "Is this is what your culture is all about?"  Another young student says people try to stay away from him in the Paris metro and he suspects it's because of what they've been hearing on the news about Indian men.

Promoted
Listen to the latest songs, only on JioSaavn.com
Most of these protesters agree that they would like to see India back in international headlines again but for a positive achievement: exemplary action taken to prevent crimes against women.

India's image has taken a rough beating in the last two weeks. There has been extensive coverage in the media in France and in the rest of the world about the challenges women living in India face with widespread sexual violence and daily harassment. Indians living abroad are facing the tough question as to why our women are treated so badly in our country.