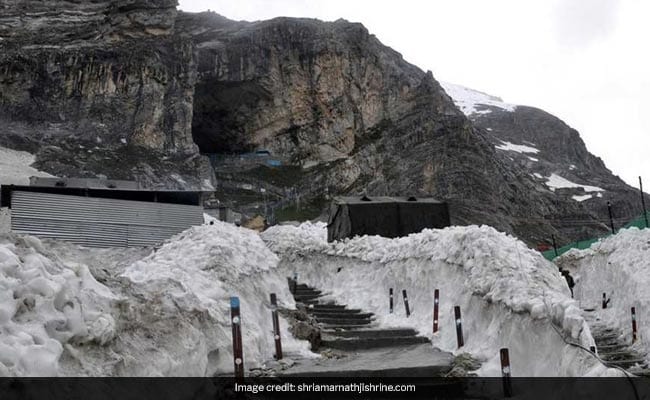 Jammu and Kashmir Governor NN Vohra today said that all arrangements have been made for the security of two-month-long Amarnath pilgrimage and there is no cause for any worry.

"I want to give a message and assurance that all security arrangements have been made for Amarnath Yatra. There is no cause for worry for the pilgrims," he told news agency PTI after offering prayers at the cave shrine, located at an altitude of 12,756 feet.

Mr Vohra was among the first pilgrims to offer prayers at the shrine dedicated to Lord Shiva in the Himalayas in Jammu and Kashmir.

Vehicles tagged with electromagnetic chips, bike and bullet-proof SUV police convoys and scores of bullet-proof bunkers have been deployed as part of the "biggest-ever" security blanket thrown to secure pilgrims undertaking the Amarnath pilgrimage, an official said.

Over two lakh pilgrims have registered for the annual pilgrimage to the cave shrine of Amarnath in south Kashmir Himalayas till now.

A posse of over 40,000 armed CRPF and state police personnel has virtually dotted the pilgrimage routes from Jammu -- via Pahalgam and Baltal -- with their overwhelming presence in armoured vehicles.

Forces have deployed a huge assortment of CCTV cameras and drones, assisted by mounted Army columns, to ensure that the pilgrimage route is not breached by terrorists and in case of a possible attack reinforcements reach as fast as possible.

Heavy rainfall today delayed commencement of the annual pilgrimage to the cave shrine from Pahalgam and Baltal base camps.

"The yatra has not commenced yet from either Baltal or Pahalgam base camps due to rain," a spokesman of the Shri Amarnath Shrine Board (SASB) said.

He said the pilgrimage will commence only after weather improves and the tracks are safe for the pilgrims to move on.

Promoted
Listen to the latest songs, only on JioSaavn.com
Amid tight security, the first batch of nearly 3,000 Amarnath pilgrims from Jammu reached the twin base camps at Baltal and Pahalgam last evening.

Of this group of pilgrims, 1,904 have opted for traditional Pahalgam route while 1,091 choose the Baltal route to reach the Himalayan cave shrine in south Kashmir. The batch comprises of 2,334 men, 520 women, 21 children and 120 Sadhus (monks), an official said. The pilgrimage will conclude on August 26 on the day of Rakshabandhan.