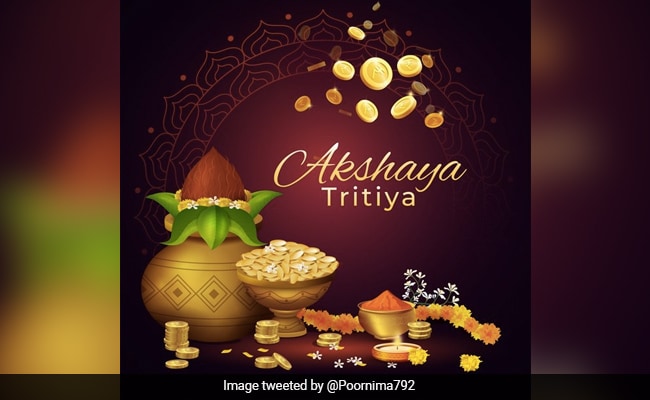 Akshaya Tritiya is on 14th May. According to Hindu scriptures, Akshaya Tritiya is one the most auspicious days of the year. In Sanskrit, Akshaya means eternal and Tritiya refers to the third day of the Shukla Paksha or Full Moon phase. Akshaya Tritiyaalso known as Akha Teej in some parts of the country. This is of the four Tithis or time when one doesn't need to look at muhurta or an auspicious moment for any special work or puja. Anytime in the entire day is considered sacred.

Preparing the Akshate: On Akshaya Tritiya, people who observe the vrat prepare Akshate. Grains of unbroken rice are smeared with haldi or turmeric and kumkum. Akshate is offered to Lord Vishnu on this day. This is believed to bring good luck for the family.

Charity: On Akshaya Tritiya, Dana or charity work is traditionally considered significant. People distribute foodgrains, clothes, jaggery and other items to the underprivileged. According to scriptures, charity work on Akshaya Tritiya brings unlimited good fortune for the entire year.

Puja, Japa and Yajya: Chanting prayers dedicated to Lord Vishnu, Ganesha or the household deity brings 'eternal' good fortune, according to scriptures. People also do Pitra Tarpan or pay respect to their forefathers on Akshaya Tritiya.

Akshaya Tritiya Naivedyam thali: This refers to special food items, which are prepared on the auspicious day and offered to the gods. The items on the Naivedyam thali or plate differs from state to state but milk and milk products like kheer, ghee, curd and sweets are a must. Items prepared with rice and coconut are also included in the Naivedyam.

Here's wishing you a Happy and blessed Akshaya Tritiya!