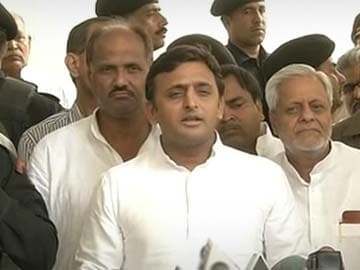 Lucknow: The Uttar Pradesh government has transferred 36 officers of the Indian Administrative Service in the wake of a meeting held between chief minister Akhilesh Yadav and senior officials to review the law and order situation in the state.

During the meeting, Mr Yadav told the district magistrate and senior superintendents of police to be more vigilant in their respective districts.

A worried Mr Yadav reportedly cautioned his officers that UP is a politically sensitive state and any incident has the potential to embarrass the government. He has asked top cops and officials at the district level to be more alert and visit a crime scene immediately and take strict action.

Even as Mr Yadav met senior police officers in Lucknow today, a BJP leader was shot dead about 500 km away in Muzaffarnagar.

Omveer Singh, 40, was the deputy leader of the BJP in the town of Mirapur in western UP. He was walking towards his farm from his home, when he was shot five times by unidentified gunmen on a bike. He reportedly returned fire with his revolver, before dying on the spot.

On Saturday, another local BJP leader, Vijay Pandit, was shot dead by four men in Greater Noida. Mr Pandit too was accosted by gunmen on motorbikes on Saturday. They put a gun to his temple and shot him. There have been protests in the area since.

Promoted
Listen to the latest songs, only on JioSaavn.com
The murders come very soon after the gang-rape of two teen girls who were found hanging from a tree in Badaun, an image that provoked outrage globally. Several other cases of brutal assault on women in UP have followed, prompting Mr Yadav's political rivals to demand his dismissal for being unable to ensure law and order.

Mr Yadav's first priority is to restore his government's badly damaged image. He promised after his meeting with top officials today, "We will improve law and order."

Delhi Man Kills Father For Refusing To Give Money For Drugs, Arrested