The voter-verifiable paper audit trail machine was introduced last year to reassure voters that the electronic voting machine had not been manipulated. 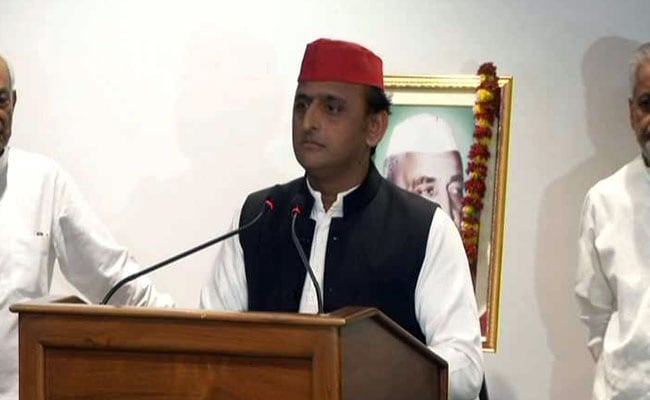 LUCKNOW: The Election Commission should scrap voting machines and go back to using paper ballot papers for next year's general elections, Samajwadi Party chief Akhilesh Yadav said today, renewing his attack on the voting machines after widespread failure of the machines in Monday's by-elections.

Nearly 10 per cent of the 10,300 VVPAT, or Voter Verifiable Paper Audit Trail machines, used in Monday's by-elections across 10 states had developed faults and had to be replaced.

The proportion of VVPAT machines that had to be replaced, however, was as high as 20 per cent in the high-stakes by-elections to the Lok Sabha seats in Kairana of Uttar Pradesh and Bhandara Gondia of Maharashtra.

"When something like this happens in an election, there is a doubt that gets formed, a suspicion. I have said it earlier too - the common man does not trust these machines anyone," Mr Yadav said.

He followed it up with a tweet, claiming there was a Gujarat connection to the machines deployed in Uttar Pradesh's by-polls.

"Hear the EVMs for the by-elections had been specially sourced  from Gujarat. Looks like Surat won't just make textiles but governments also," Mr Yadav said, playing on the opposition charge in Gujarat that tampered voting machines had helped the ruling BJP retain the Gujarat in the December 2017 assembly elections.

Chief Election Commissioner OP Rawat insists that there was no problem in the electronic voting machines yesterday "Yes, problems were noticed in the VVPATs which were used for the first time in these constituencies and by the polling parties," Mr Rawat told news agency ANI today.

That distinction is immaterial for political parties and voters as polling has to be halted every time a machine develops a fault. Also, parties say many voters do not wait for the replacement machines to arrive.

The Election Commission has promised to look carry out a detailed analysis to ascertain why a large number of voter trail machines development faults.

The commission had yesterday said placing the VVPAT machines under direct light, mishandling and extreme heat could have been responsible for the high failure rate.

Mr Yadav said it was ridiculous to blame the heat for VVPATs failing in areas that were a stronghold of the party. "Was it winters... cold in other parts of the constituency and the state," Mr Yadav reasoned.

"In today's day and age to blame the temperature for faulty EVM's or VVPAT's doesn't gel," he said.

The voter-verifiable paper audit trail machine was introduced last year to reassure voters that the electronic voting machine had not been manipulated.

It generates a paper slip, through which a voter can verify that their vote went to their intended party or candidate. The slip is also kept in the Election Commission records for future reference.

Mr Yadav said he would talk to other political parties to build consensus to use paper ballot papers. "This election has been an eye opener - we need to jointly demand elections by ballot paper," he added.

Promoted
Listen to the latest songs, only on JioSaavn.com
The Congress has already put its weight behind dumping the voting machines introduced in state elections two decades earlier and asked the election commission to go back to paper ballots.

Akhilesh Yadav had also accused officials of using defective machines to slow down voting in polling booths of Uttar Pradesh's Gorakhpur and Phulpur where his party had done well. The EVM glitch, however, reduced the victory margin, he had later claimed.
Comments
Akhilesh YadavKairana By ElectionVVPAT paper trail