Akhilesh Yadav and Mayawati's meeting in Delhi last week raised a lot of talk over reports that the two had decided on a coalition for the 2019 polls.

Last year, Akhilesh Yadav and Mayawati pooled in resources and contested three UP bypolls and won all.

Akhilesh Yadav and Mayawati have called a joint press conference tomorrow at noon at a five-star hotel in Uttar Pradesh capital Lucknow to announce their widely-anticipated alliance for the national election due by May.

Akhilesh Yadav's Samajwadi Party and Mayawati's Bahujan Samaj Party (BSP) have been in talks for weeks. Last week, their meeting in Delhi raised a lot of talk over reports that the former chief ministers had decided on a "mahagathbandhan" or grand coalition leaving the Congress out of the equation in Uttar Pradesh, India's most politically vital state.

Over the week, the two leaders also put out press statements that specifically referred to the word "gathbandhan". Mayawati's press statement was in solidarity with Akhilesh Yadav amid reports that the CBI may question him on investigations into a mining scam that allegedly took place when he was chief minister. "Don't be shaken," she advised.

Akhilesh Yadav returned the favour when he put out a press release to condemn Prime Minister Narendra Modi's remarks at a rally in Agra on Mayawati "forgetting" an attack on her by Samajwadi party workers in 1995 for "political gains". "PM Modi is scared of the alliance," said Akhilesh Yadav.

Smaller parties like the Rashtriya Lok Dal (RLD) and the Nishad Party are also likely to be in the alliance but they are cautious about seat-sharing. The RLD of Ajit Singh wants five seats in western UP, but is only being offered two. "Talks over seat-sharing are still on, we haven't discussed seats yet," said Ajit Singh.

The Mayawati-Akhilesh combo has reportedly decided not to field candidates in Amethi and Raebareli, the seats held by Congress president Rahul Gandhi and his mother Sonia Gandhi.

Anticipating a "maha" snub, the Congress has been talking about going it alone in the state that has always been considered the key to power in Delhi.

For the party, the larger worry is that the UP alliance may become a template in other states and stymie the grand coalition of opposition parties taking on the BJP and PM Modi together.

In 2014, the BJP and its ally Apna Dal managed to win a whopping 73 of Uttar Pradesh's 80 parliamentary seats, while the BSP, Samajwadi party and the Congress were decimated.

Akhilesh Yadav's attempt to retain power in Uttar Pradesh by joining hands with the Congress for the 2017 state polls also flopped miserably as the BJP came to power with a huge majority.

Last year, Akhilesh Yadav and Mayawati decided to bury their legendary rivalry and pool in their resources in three bypoll contests. The alliance snagged three BJP seats; Gorakhpur was won by Nishad Party, Kairana by the Rashtriya Lok Dal and Phulpur by the Samajwadi Party. It gave them hope that together, they can pull voters away from the BJP. 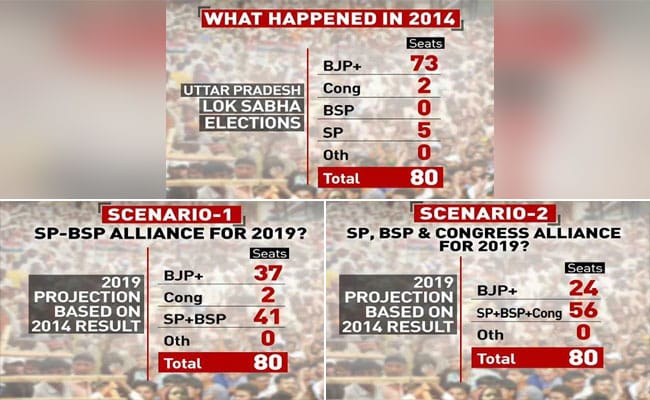 The alliance is expected to be a major headache for the BJP, which recently lost three major state elections. The party stands to lose as many as 36 of the seats it won in 2014.

For the BJP, the election defeats came with the realization that the upper caste voters, who have always been a loyal vote-base, are disenchanted with the ruling party.