Air fares for the Srinagar-Delhi route, for example, ranged between Rs 10,000 to Rs 20,000 for August 4, travel websites showed today. 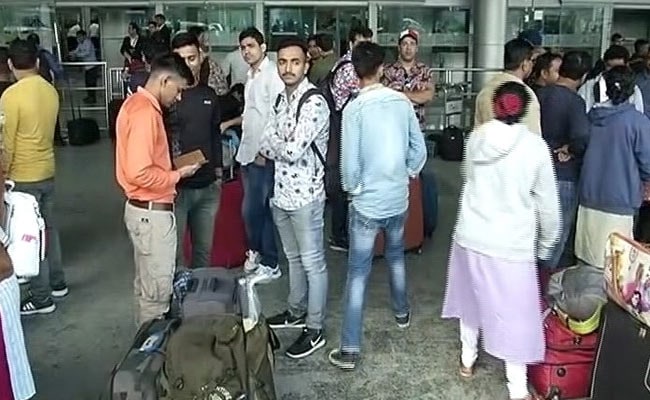 The Ministry of Civil Aviation intervened to try and check the surging air ticket prices amid the rush.

Airlines in the country have been asked to curb soaring air fares on the Srinagar route after the Jammu and Kashmir administration issued an advisory asking tourists and Amarnath Yatra pilgrims to leave the Kashmir Valley "immediately" amid intelligence about terror threats.

Following the advisory, anxious tourists crowded the airport in Srinagar on Saturday, many without tickets for flights. The Ministry of Civil Aviation intervened today to try and check the surging air ticket prices amid the rush.

"Hon'ble Minister for Civil Aviation Shri @HardeepSPuri has asked all the Airlines to rein in the surging Air Fares for pilgrims returning from Amarnath dham," the Ministry of Civil Aviation's official account said on Twitter.

Air fares for the Srinagar-Delhi route, for example, ranged between Rs 10,000 to Rs 20,000 for August 4, travel websites showed today. Some flights on the route were priced at more than Rs 25,000.

"Air fares from Srinagar have gone up due to the sudden rush of tourists to cut short their plans and get out of Srinagar," Chief Operating Officer of travel website Yatra.com was quoted by news agency IANS.

Former Jammu and Kashmir Chief Minister and leader of National Conference party Omar Abdullah on Twitter urged Union minister for civil aviation Hardeep S Puri to look into the soaring prices. "These are the fares people traveling out of Srinagar are being forced to pay. Yatris will get special flights & controlled fares but what will happen to patients, students & other people who have to travel," Mr Abdullah said, sharing a screenshot of a travel website showing exorbitant air fares.

According to Airports Authority of India (AAI), 6,126 passengers reported at the Srinagar International Airport today to travel out of the Valley. Out of this, 5,829 passengers travelled by 32 scheduled flights; the remaining passengers were accommodated in four Indian Air Force aircrafts and flown to various destination like Jammu, Pathankot and Hindon.

The AAI said all passengers were flown out of the valley in a planned and systematic manner.

Aviation regulator Directorate General of Civil Aviation had advised airlines yesterday to be prepared to operate additional flights from Srinagar's airport if the need arises.

The advisory issued yesterday asked the pilgrims and tourists to "curtail their stay" and "return as soon as possible". It is being seen as an unprecedented move as pilgrims and tourists have never before, even at the height of militancy, been urged to leave Kashmir, which has seen a massive build-up of troops over the past week.

"We have been coming here for many years, but we have never seen such an advisory from the government. This is unprecedented. We were enjoying ourselves, but the order has led to chaos and fear," Ramesh Kumar, a tourist in Kashmir from Haryana, told news agency Press Trust of India.