Air Chief Marshal RKS Bhadauria today referred to the suicide attack in Jammu and Kashmir's Pulwama in February as a reminder that defence installations need to be on alert at all times.

At the Indian Air Force's (IAF) 87th birthday celebrations, the IAF chief the "present security environment in the neighbourhood is a serious cause of concern", news agency ANI reported.

"The Pulwama attack is a stark reminder of the persistent threat to defence installations," Air Chief Marshal Bhadauria said. Forty soldiers of the paramilitary Central Reserve Police Force (CRPF) were killed in a suicide bomb attack on their convoy on Jammu-Srinagar highway in Pulwama in February. India responded with an airstrike.

He said the decision to bomb a terror camp of the Jaish-e-Mohammed in Balakot, deep inside Pakistan, marked a major shift in the government's policy on national security.

"Strategic relevance of this (Balakot airstrike) is the resolve of political leadership to punish perpetrators of terrorism. There is a major shift in the government's way of handling terrorist attacks," he said at Hindon Air Force Station near Delhi. 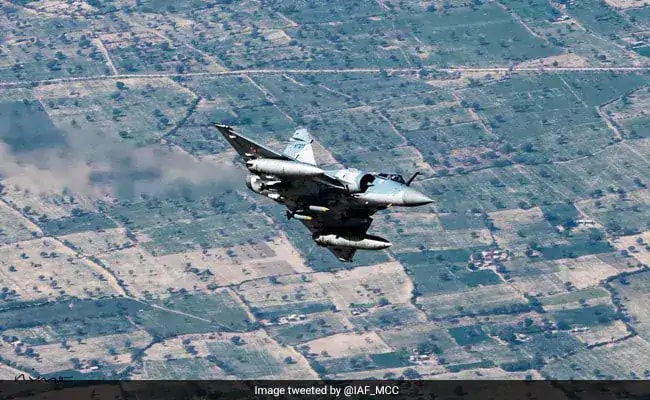 As part of the Air Force Day celebrations, the air display started with flag-bearing sky divers of the Akash Ganga team dropping out of an AN-32 aircraft in their colourful canopies. The IAF will also showcase its Chinook heavy-lift twin-rotor transport helicopter and the Apache attack helicopters for the first. Both these helicopters were acquired from the US and inducted into the IAF in the last few months.

Defence Minister Rajnath Singh is in France to take delivery of the first of the 36 Rafale fighter jets that India is buying in a Rs 59,000 crore deal.

Though the formal handover ceremony takes place today, the first batch of four Rafale jets will fly to their home base in India by May 2020.

Prime Minister Narendra Modi gave his wishes in a tweet this morning: "Today, on Air Force Day, a proud nation expresses gratitude to our air warriors and their families. The Indian Air Force continues to serve India with utmost dedication and excellence."

Today, on Air Force Day, a proud nation expresses gratitude to our air warriors and their families. The Indian Air Force continues to serve India with utmost dedication and excellence. pic.twitter.com/iRJAIqft11

Air Chief Marshal RKS Bhadauria took over as the 26th chief of the Indian Air Force on September 30. He was commissioned into the fighter stream of the IAF in June 1980.