Mr Madhusudhanan has been the chairman of the AIADMK's presidium since 2010 and was a staunch supporter of Deputy Chief Minister O Panneerselvam or OPS, during his brief estrangement with the party this year. 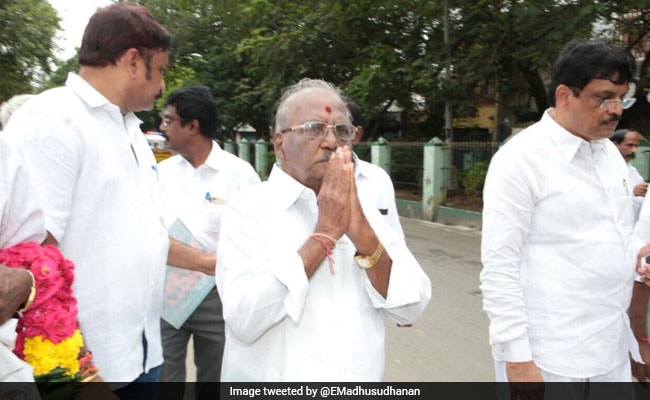 Chennai: AIADMK's E Madhusudhanan, the only candidate in the race for the prestigious RK Nagar constituency in Chennai, to have won an election from this seat earlier. This was 20 years ago, in 1991, when he was inducted into party's patriarch J Jayalalithaa cabinet as the handloom minister.

Mr Madhusudhanan, who has been the chairman of the AIADMK's presidium since 2010 and was a staunch supporter of Deputy Chief Minister O Panneerselvam or OPS, during his brief estrangement with the party this year, was picked as the "unanimous choice" of the united AIADMK after the party was granted the party's famous two-leaves symbol by the Election Commission. O Panneerselvam's backing was an important reason for the party settling for him as was the fact that he had kept his links with the constituents intact.

Much of this goodwill that Mr Madhusudhanan is said to have earned over the last five decades will be put to test when the Election Commission starts counting the votes on Sunday from this AIADMK stronghold. But Mr Madhusudhanan should have it easy. The party has won 7 of the 11 elections in the constituency over the last 40 years.

Promoted
Listen to the latest songs, only on JioSaavn.com
But his political journey hasn't been without its share of ups and downs. Mr Madhusudhanan was convicted and later acquitted in a free dhoti-saree scam during his term as Handloom Minister back in the nineties. Mr Madhusudhanan, who started out as a hardcore loyalist of MGR in the eighties had sided with Jayalalithaa and stayed on the same side when the AIADMK split into Jaya and Janaki factions in 1989.

The RK Nagar seat was left vacant by the death of AIADMK chief and former Chief Minister J Jayalalithaa and retaining it is a matter of prestige for Tamil Nadu's ruling party and also its first electoral test since the death of its powerful leader.