Live Updates: Will Tell You When I Take A Decision, Says KCR On Dissolution Of Assembly

On key agenda for the TRS meeting, KCR hopes to showcase the achievements of his government in the last four years. TRS leaders said one lakh people were expected at the venue. 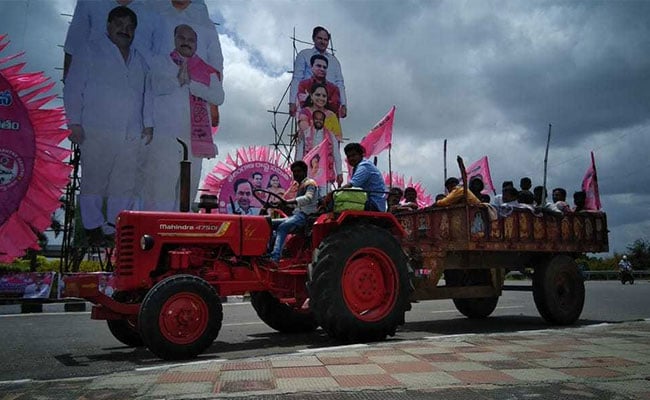 Telangana's ruling party TRS or Telangana Rashtra Samithi hosts its one-of-its-kind "mother of all meetings" in the state today, some 25 kilometres outside the capital city of Hyderabad. The venue chosen for the meet is 2,000 acres of land - dubbed the Pragathi Nivedhana Sabha - in Ranga Reddy district. Overnight rain that left the center stage and carpets soaking wet however did not get in way of supporters who painted the city pink with massive banners placed across the city along with rallies in the district. A cabinet meeting was held before the public meet and sources suggest that there were no talks about the dissolution of the Telangana assembly.

The meet commemorates the 4th anniversary of Telangana's formation. It was believed that the meet would provide a platform for K Chandrasekhar Rao, popularly known as KCR, to announce the dissolution of the Telangana assembly to pave way for early polls in the state. On key agenda for the meeting, KCR hopes to showcase the achievements of his government in the last four years. TRS leaders said one lakh people were expected at the venue.

Here are the updates of TRS' Party Meeting in Hyderabad: 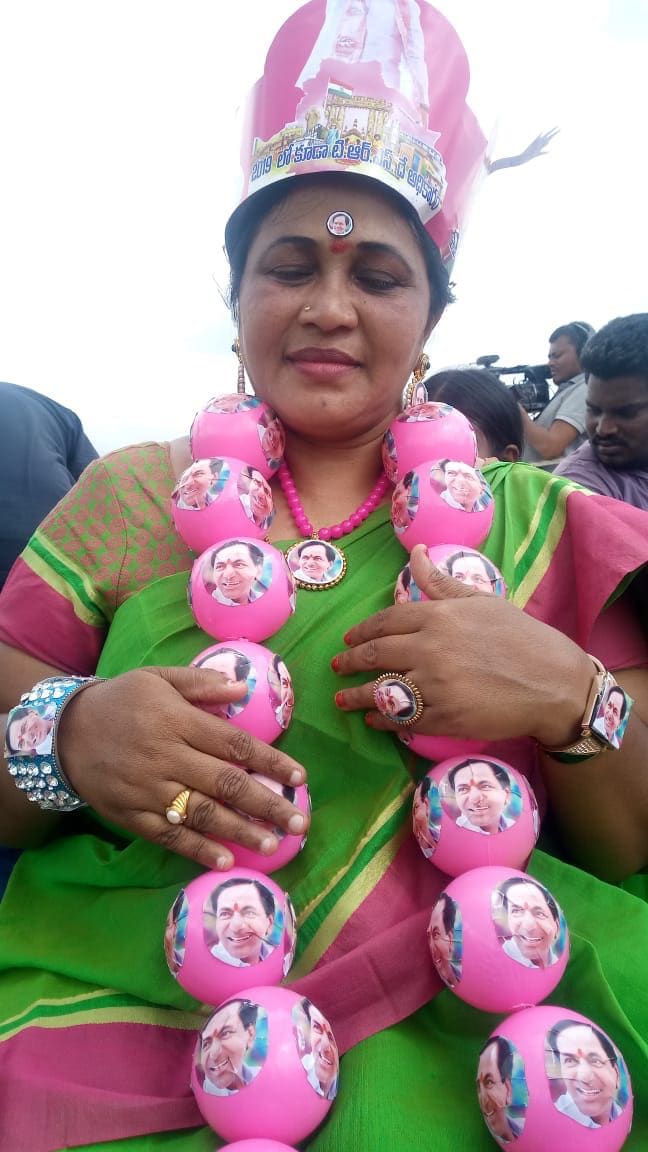 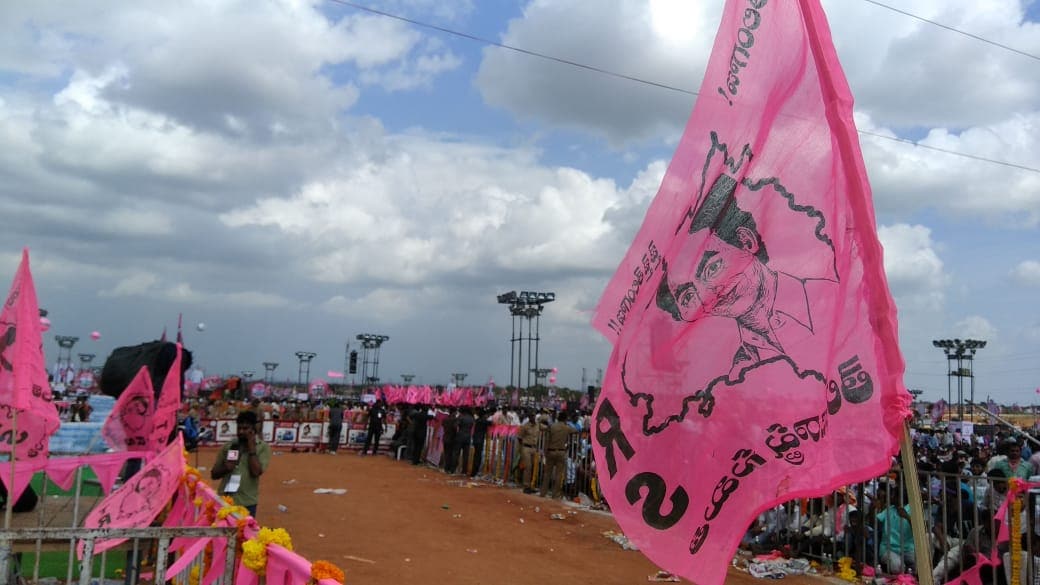 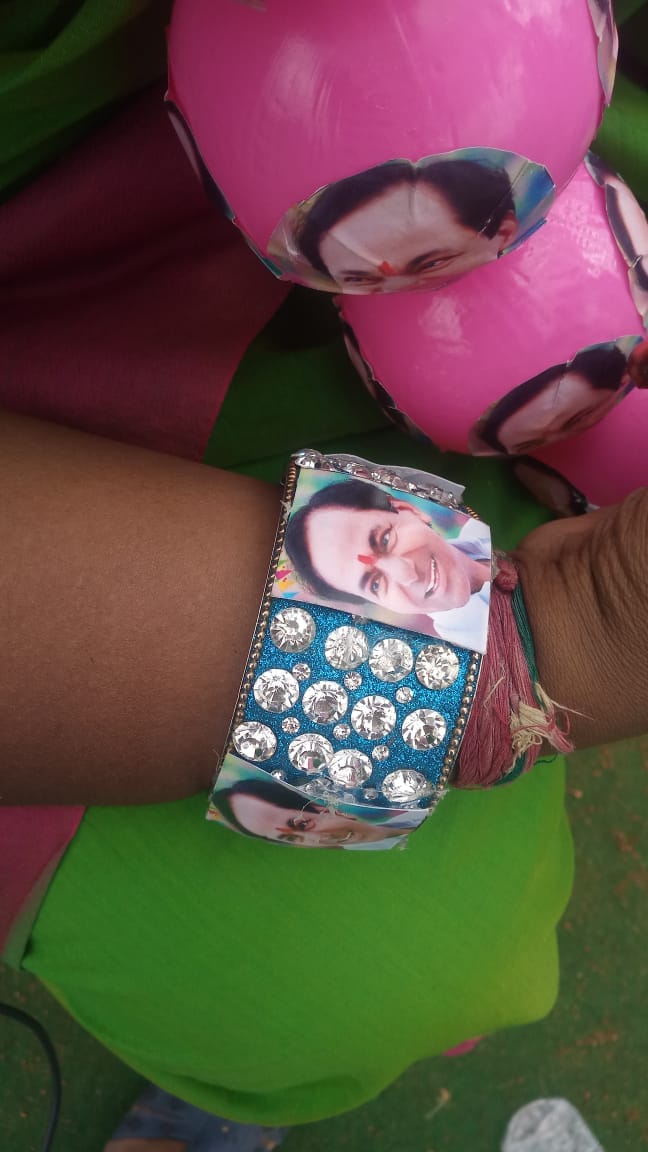 Sep 02, 2018 15:46 (IST)
"Have decided to sanction Rs 70 crore and 70 acres for construction of 'self-respect' buildings for people from different castes": Etela Rajender, Telangana Finance Minister after cabinet meet
Sep 02, 2018 15:08 (IST)
A cabinet meeting was held by TRS leaders ahead of the mega party meet. Sources suggest that the cabinet meet concluded with no talks about the dissolution of the Telengana party that was earlier believed to be on the agenda.
Sep 02, 2018 14:42 (IST)

Sea of TRS party pink when @TelanganaCMO#KCR will tell the people of #Telangana that the state is in the pink of health under his leadership and better times await post the next elections @ndtvpic.twitter.com/Z5UypdAzz4

Sep 02, 2018 14:39 (IST)
Heavy security deployed near the TRS meeting venue where over 20 lakh people are expected. About 2,000 acres have been identified, including 500 acres of the meeting venue, for the mammoth gathering, for which TRS leaders are mobilizing cadre and others from every district in the state. 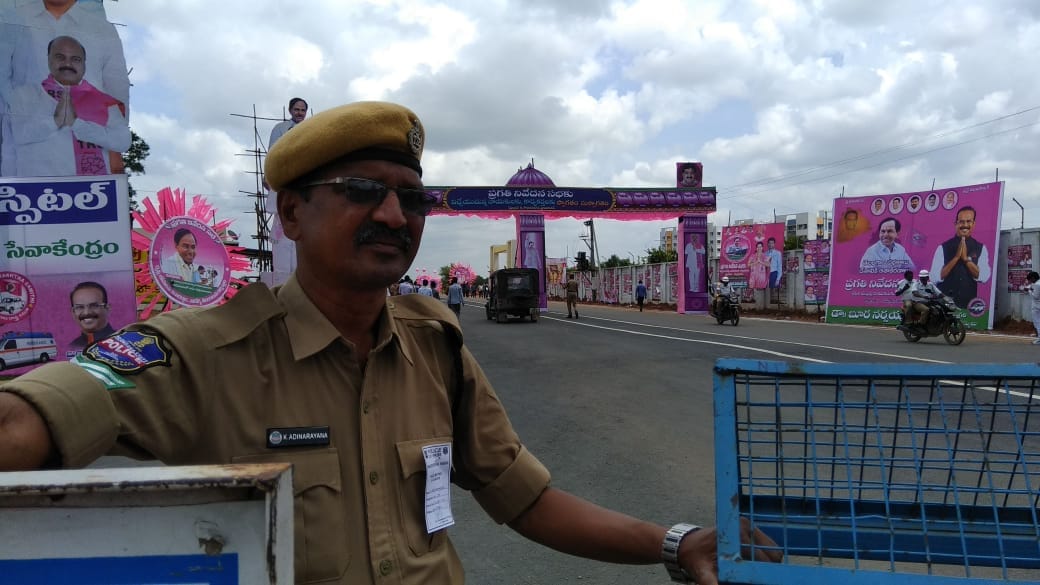 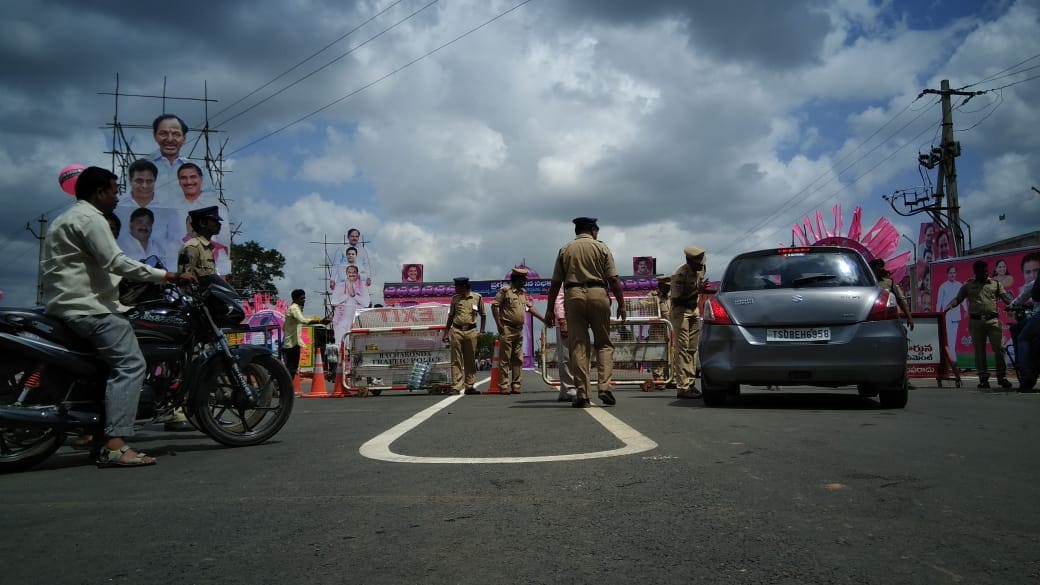 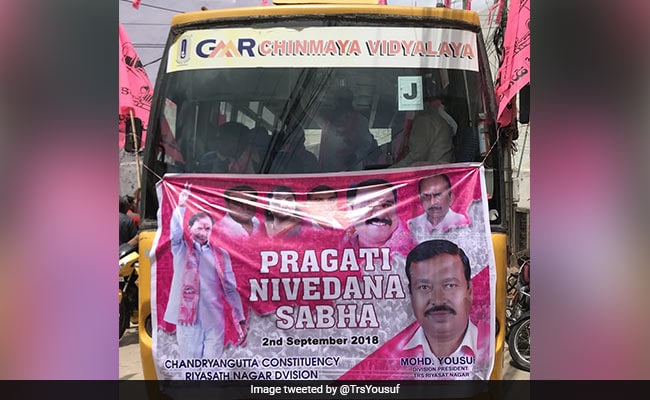 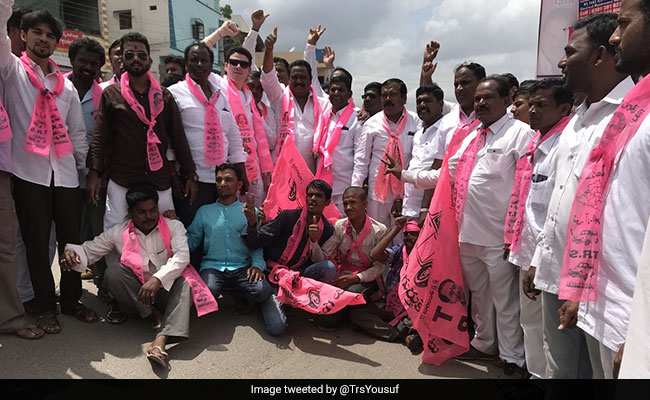 Buses from Riyasath nagar Division carry supporters to the Pragathi Nivedana Sabha meeting that is to begin soon. The buses were decorated with the party flags and banners. Supporters also wore pink scarfs with a party flag on it.
Sep 02, 2018 13:46 (IST)

Sep 02, 2018 12:59 (IST)
Stage set for TRS's Pragathi Nivedana Sabha meeting that is to see some 25 lakh people, according to the party members. The meeting commemorates 4 years of the formation of Telangana and intends to use the meeting to give people a "report card" on the government's performance over the last four years. 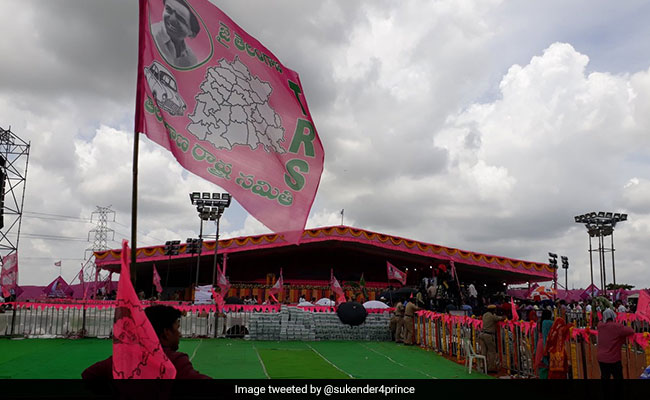 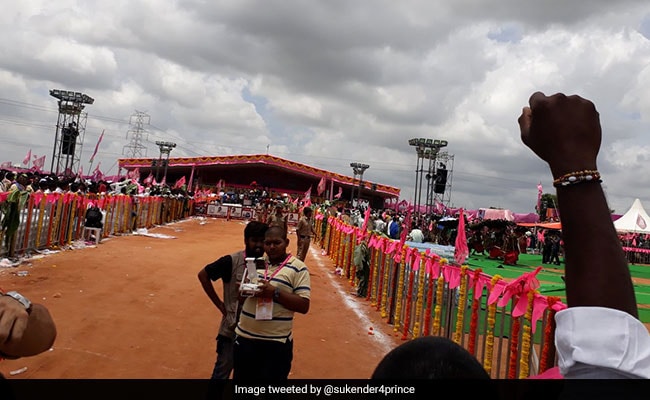 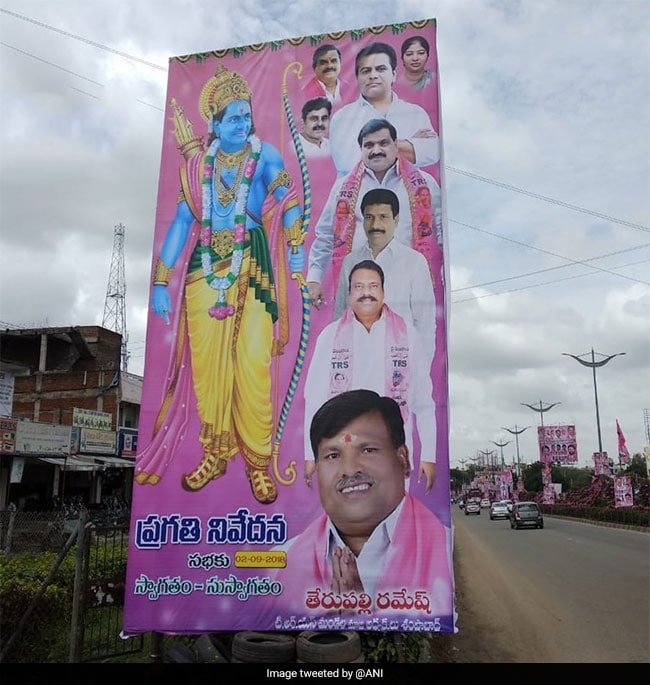 Telangana Chief Minister K Chandrashekar Rao depicted as Lord Rama in a party poster as part of promotions for the Pragathi Nivedana Sabha meeting that will be held later today.
The entire city is dressed in party pink, with banners, hoardings, posters on every pillar, flags and even massive cutouts, to announce the mega-event through which KCR hopes to showcase the achievements of his government in the last four years.
Sep 02, 2018 12:50 (IST) 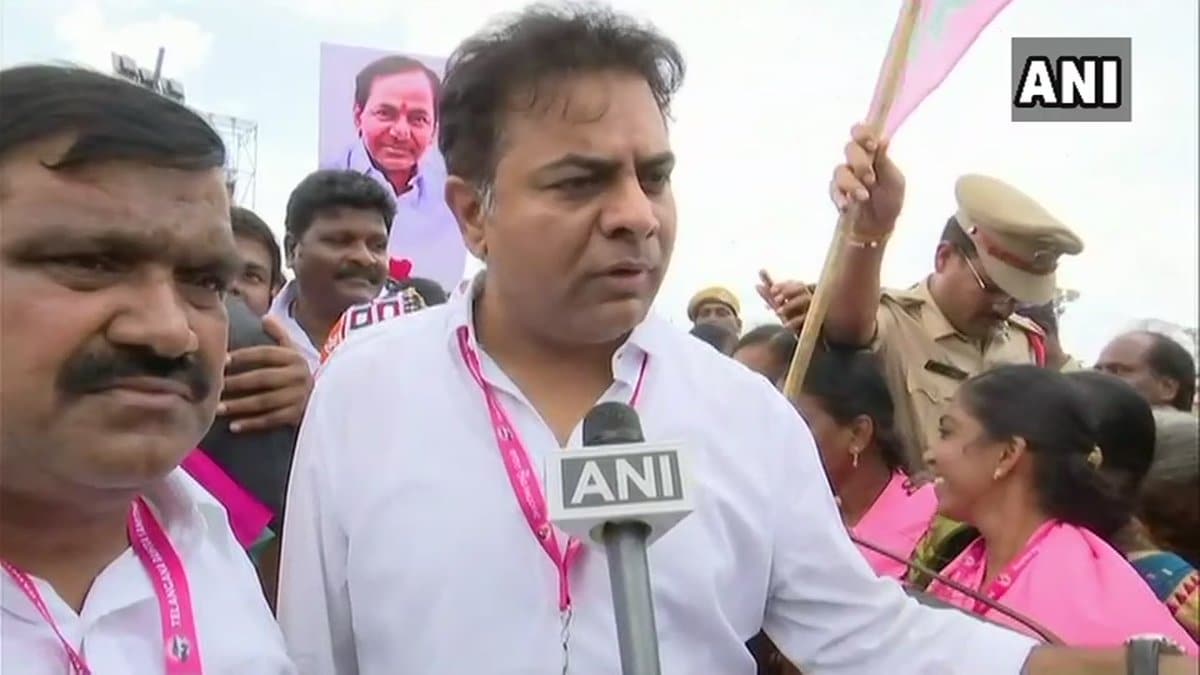 "The turnout in this rally is going to be something that people will remember for a long time, it is going to be the biggest political rally ever held in India," Telangana Minister KT Rama Rao told ANI.
Sep 02, 2018 12:46 (IST)
16 new roads were laid and trees translocated, which were paid for by the Hyderabad Metropolitan Development Authority, KT Rama Rao claimed. 500 washrooms and ambulances have been set up and thousands of policemen have also deployed for the meeting. All senior officers have been given specific responsibilities, vis-a-vis security, logistics, arrangements, traffic regulation and so on.

Sep 02, 2018 12:24 (IST)
Massive hoardings of Telanagana Chief Minister K Chandrasekhar Rao, daughter Kavitha and other leaders of the party placed across the city for its one-of-its-kind "mother-of-all-meetings" today. 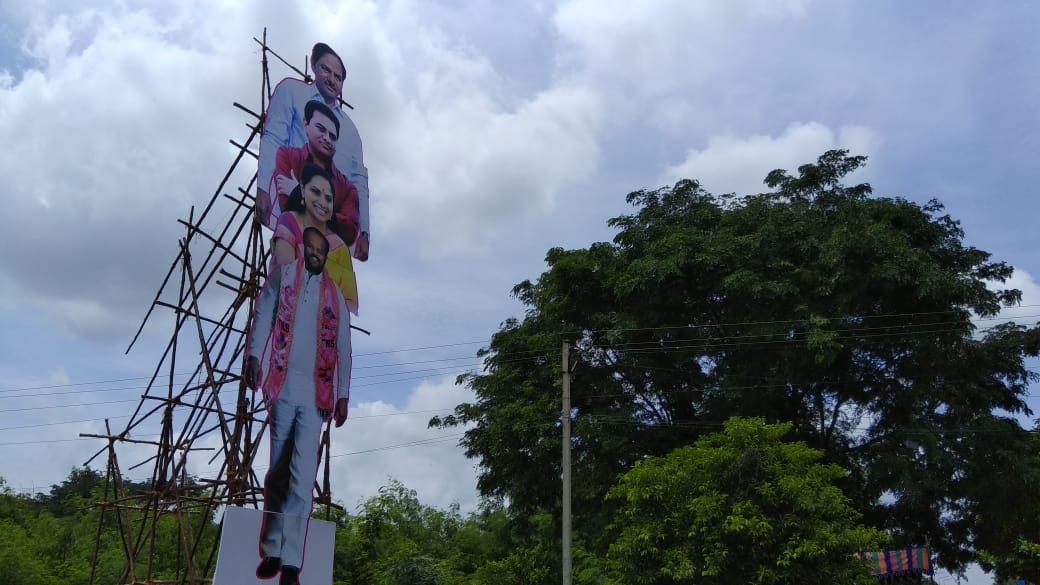 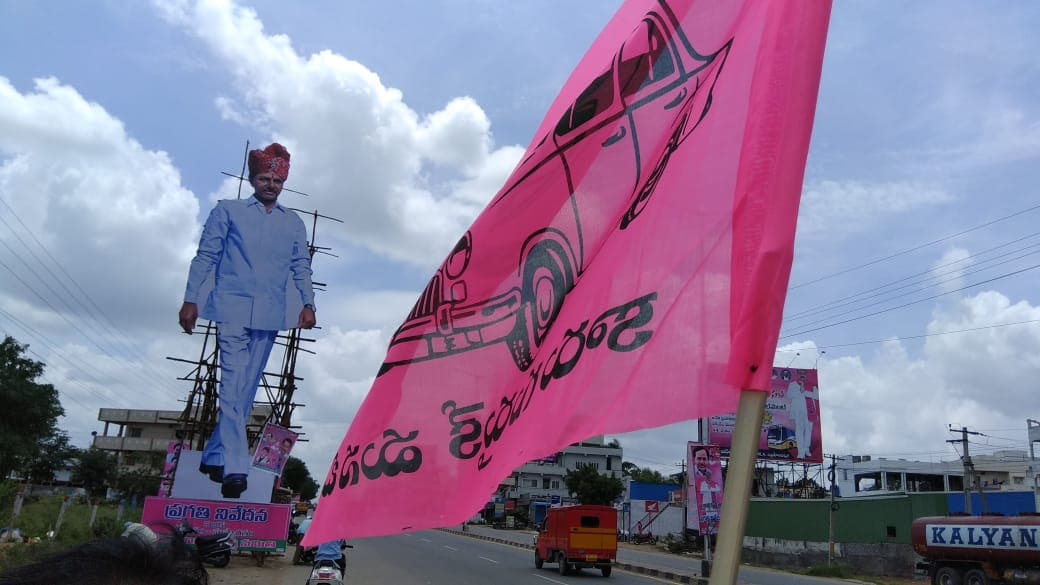 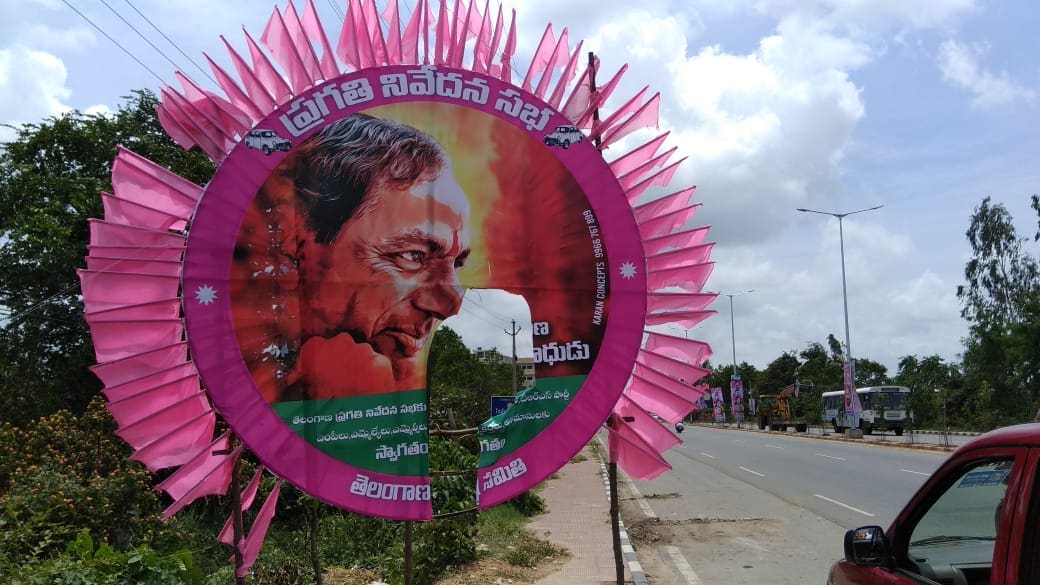 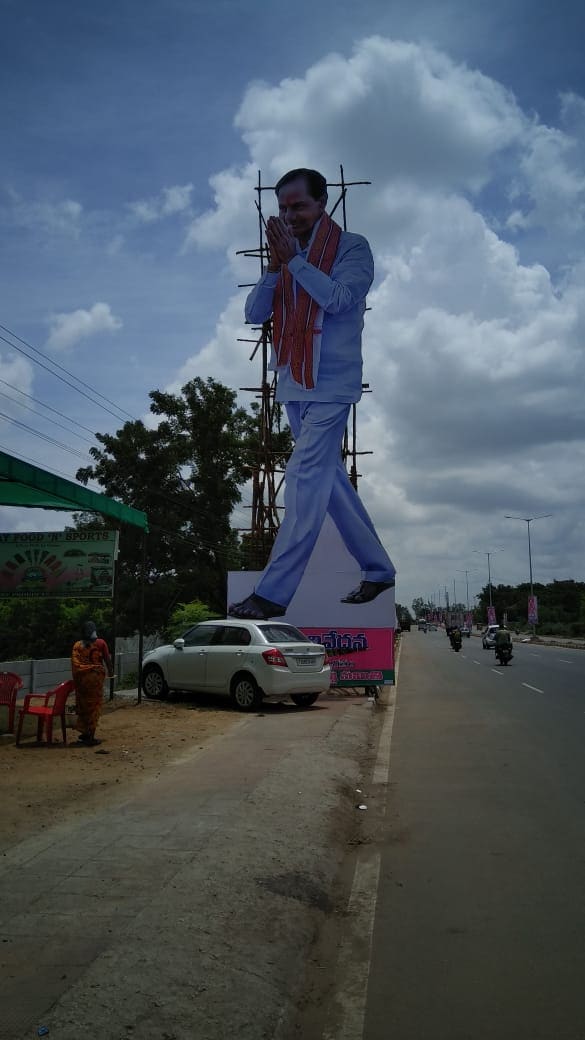 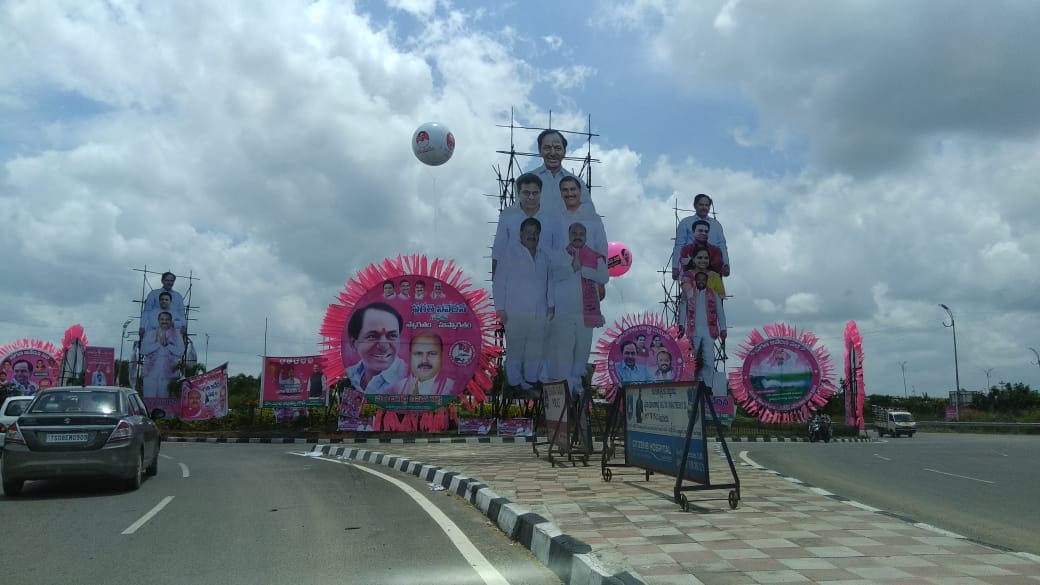 Sep 02, 2018 12:14 (IST)
The overall route map displayed at the venue of TRS' meet. The Telangana state cabinet's meeting at the 2,000 acre venue, dubbed as Pragathi Nivedhana Sabha, is being billed to be the largest public meeting in Indian history. 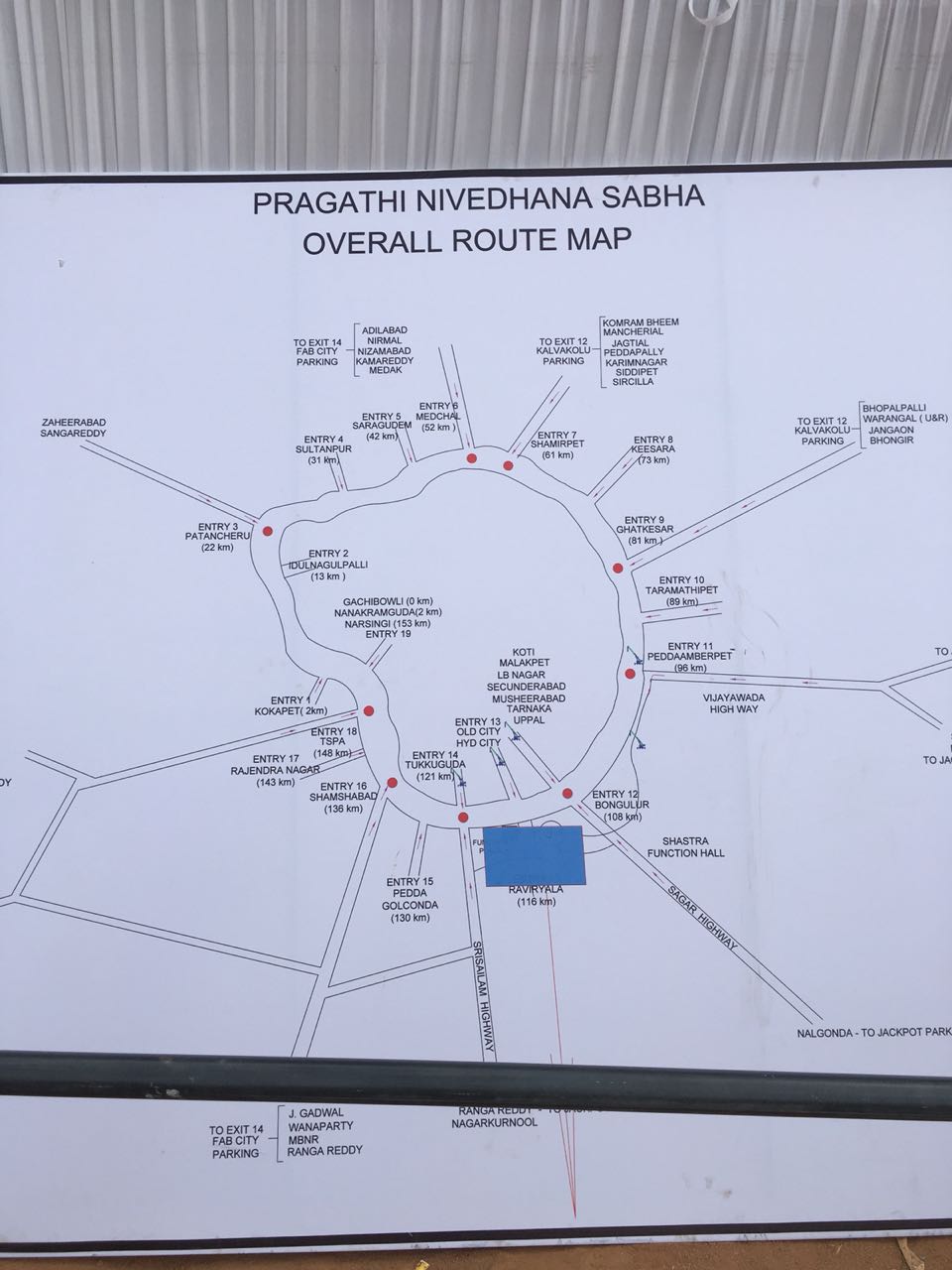 Raining Sops In Telangana. KCR Could Soon Announce Early Polls, Say Sources
Will he won't he, is the big question on everyone's mind. A cabinet meeting prior to the massive public rally has heightened speculation of early elections in Telangana. Chief Minister K Chandrasekhar Rao could announce decision to dissolve assembly and go for early elections, sources have told NDTV.
Sep 02, 2018 11:50 (IST) 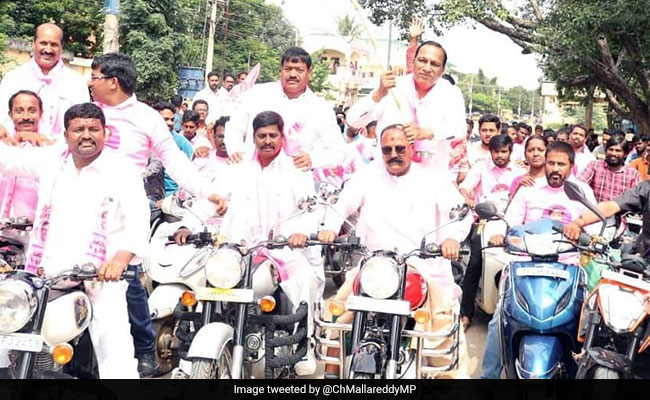 Hundreds participated in a bike rally at Medchal towards the Pragathi Nivedhana Sabha venue ahead of the massive meeting. Supporters held flags and banners as they rode to the venue.
Sep 02, 2018 11:47 (IST) 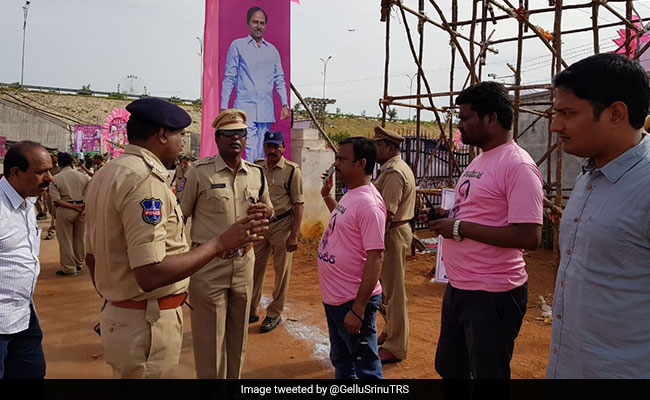 Police along with TRS volunteers at the venue of the meeting that is to begin at 1 pm today. "You can expect important political announcements by our party leader. And after this meeting, political climate in the state will most certainly heat up" the chief minister's son and Telangana's municipal administration and IT minister KT Rama Rao, popularly known as KTR, had told NDTV on Saturday.
Sep 02, 2018 11:31 (IST)
TRS cadre take buses to the venue of the meeting that will happen later today

Enthusiastic cadres on the way to #PragathiNivedhanaSabhapic.twitter.com/MRExwKgWdy

Sep 02, 2018 11:24 (IST)
Hundreds of TRS party volunteers led by MLC Shambipur Raju were trained a few days ago to coordinate with police on the day of Pragati Nivedana Sabha event. 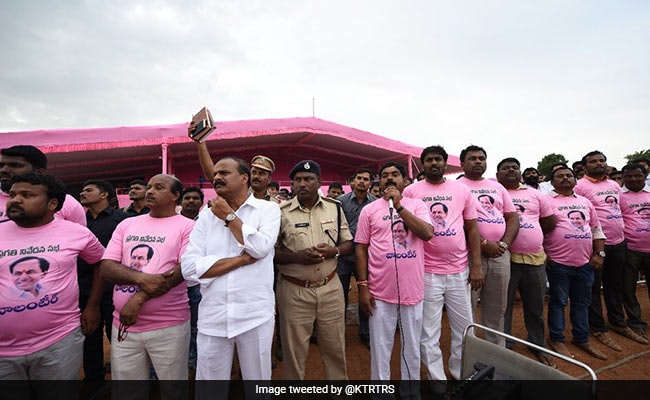 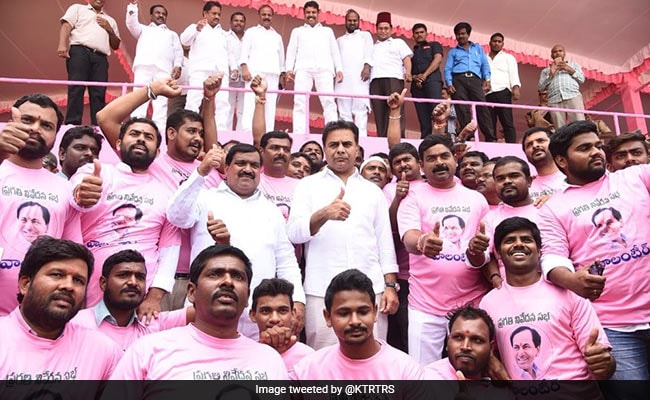 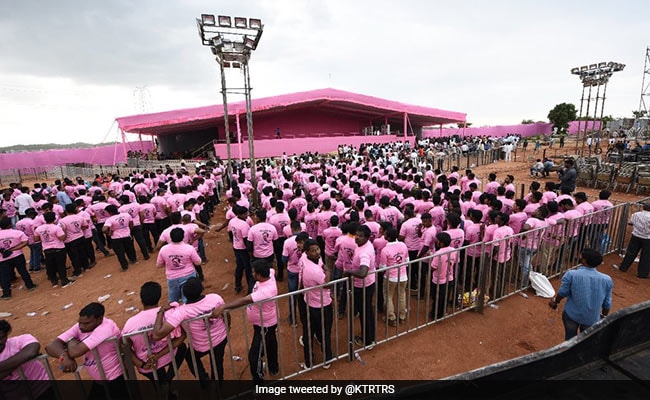 Sep 02, 2018 10:09 (IST)
KCR's daughter K Kavitha on TRS-BJP relationship:
We have to meet the government. We have to meet the prime minister for various issues especially something like a zonal issue. The urgency of this issue called for a meeting with the PM. Obviously when two politicians meet, there will be talk about politics. BJP and TRS as parties, have no relation. We will certainly see the BJP as an opposition party. When we see the TRS government communicating with the BJP government, we will have cordial relationships for the interest of the state. Otherwise, BJP as a political party is no friend of ours.
Sep 02, 2018 10:04 (IST)
Advisory issued by Telanaga:
Sep 02, 2018 09:27 (IST)
The TRS party posted images of preparations ahead of the meeting later today. "Thousands of farmers and party workers who have already reached the neighboring districts," a tweet from the party read.

Sep 02, 2018 09:25 (IST)
20,000 police personnel deployed for TRS meet
The party has ensured that the meet is a grand success. Adequate security arrangements are in place to ensure that no untoward incident takes place. Over 20,000 police personnel have been deployed at the venue chosen for the meet.
Anti-maoist elite Greyhounds, anti-terror squads have been put on alert. The state government has also deployed SHE teams in addition to regular state police.
CCTV cameras installed at venue.
Sep 02, 2018 09:23 (IST) 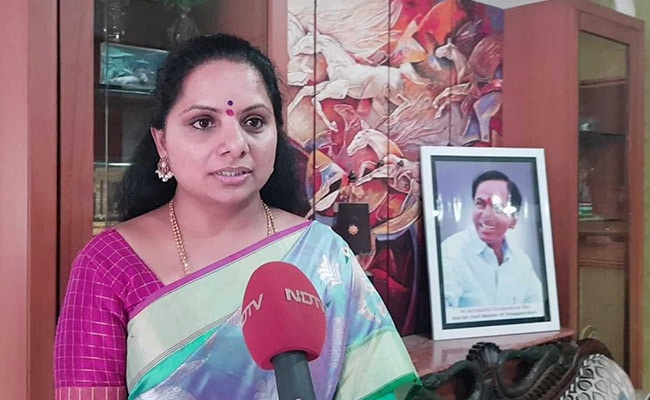 Big day for #TRS to showcase 'achievements' through progress report on four years of rule in #Telangana by @TelanganaCMO at mammoth public meeting to be attended by 25 lakh people; cabinet meet at 1 pm after which #KCR will make 'imp political announcements' at rally @ndtvpic.twitter.com/v1NtQEwYr6 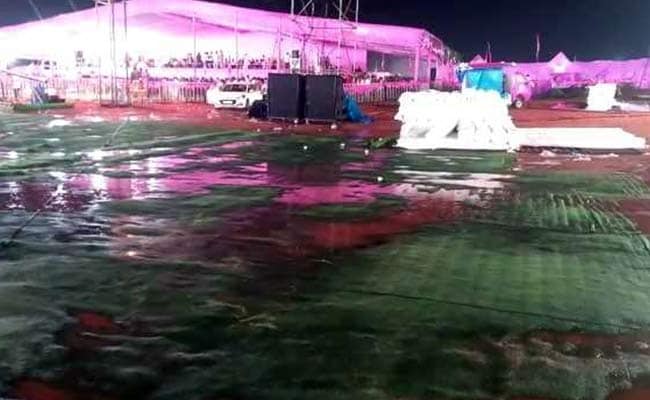 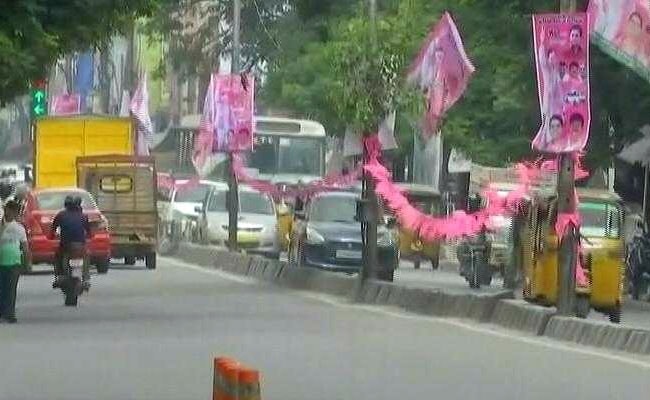 Two days before the meeting, about 2,000 tractors carrying some 20,000 farmers were making their way from Khammam towards the meeting venue - about 300 km away - all draped in pink.
Sep 02, 2018 08:51 (IST)
About 7,300 out of about 10,500 buses or nearly 70 per cent of the bus fleet in the state has been hired by the ruling party that claims they are making payments to the RTC, electricity and water departments for making arrangements and facilitating this meeting.
Sep 02, 2018 08:51 (IST) 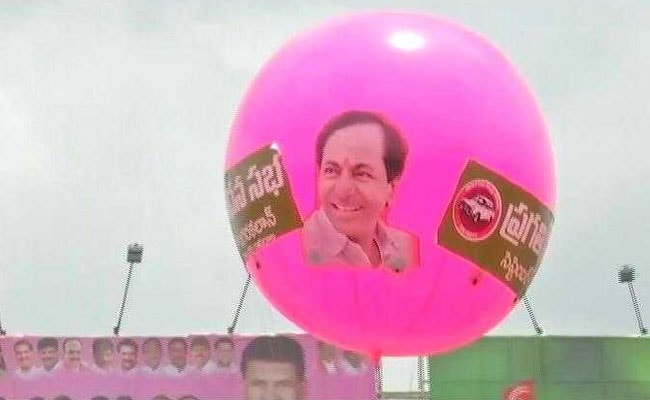 The political meeting is happening about 25 km outside Hyderabad. Yesterday the entire city was dressed in party pink, with banners, hoardings, posters on every pillar, flags and even massive cutouts, to announce the mega-event through which KCR hopes to showcase the achievements of his government in the last four years.
Sep 02, 2018 08:49 (IST)
The Telangana state cabinet will meet at 1 pm today ahead of what is being billed to be the largest public meeting in Indian history later this afternoon.
September 2 is the fourth anniversary of Telangana's formation and the ruling TRS wants to showcase four years of its rule by presenting a report card of its achievements to the people.