Posters displaying slogans for KCR and his new party were put up on the streets of Hyderabad. 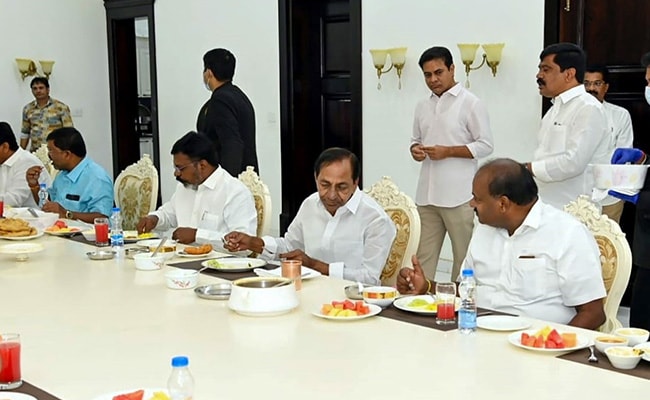 Telangana CM KCR is all set to launch a national party today.

Telangana CM KCR is all set to launch a national party today.

Posters displaying slogans for KCR and his new party were put up on the streets of Hyderabad.

Mr Kumaraswamy reached Hyderabad yesterday to attend the meeting. He, along with 20 JDS legislators will take part in the launch of the national party by KCR.

Earlier in May this year, KCR in his bid to unite the Opposition to take on the BJP at the Centre in the 2024 Lok Sabha polls, KCR held a meeting with former Prime Minister HD Deve Gowda in Bengaluru where he discussed an alternative political outfit to the BJP.

The Young Men's Christian Association in Telangana and Andhra has extended its support to K Chandrashekhar Rao's decision to float a new national party stating that the Chief Minister is doing so for the "development of minorities".

The Association, which has nearly 250 units in both Telugu states comprising over 10 lakh members, passed a unanimous resolution.

"We welcome CM KCR's entry into national politics for the development of minorities, We stand by CM KCR who is protecting the rights of minorities. YMCA members presented the unanimous resolution supporting CM KCR's national party to MLC Rajeshwar Rao," said a statement by the association.

Earlier on Tuesday, a political row erupted after a TRS leader was seen distributing liquor bottles and chicken to locals in Warangal.

Slamming K Chandrashekar Rao after TRS leader Rajanala Srihari was seen distributing liquor bottles and chicken to locals, Congress leader Madhu Yashki on Tuesday called the Chief Minister a "brand ambassador of liquor". He alleged that KCR is "known for his drinking habits".

Srihari distributed 200 chickens and liquor bottles to labourers. The cutouts of KCR and minister KTR were seen in the video.

Speaking to ANI, Yashki alleged that KCR is trying to make the people and youth of the state "addicted to liquor and drugs".

"KCR is a brand ambassador of liquor. He not only drinks liquor but is also involved in the liquor scam. So this establishes that the TRS party supremo is known for his drinking habits. His passion for drinking and the way he is promoting liquor sales in Telangana. Instead of giving jobs, he is distributing liquor," he said.