Prime Minister Modi is expected to seek assurances from Trump on the Defense Technology and Trade Initiative that facilitates US arms technology transfers to India. 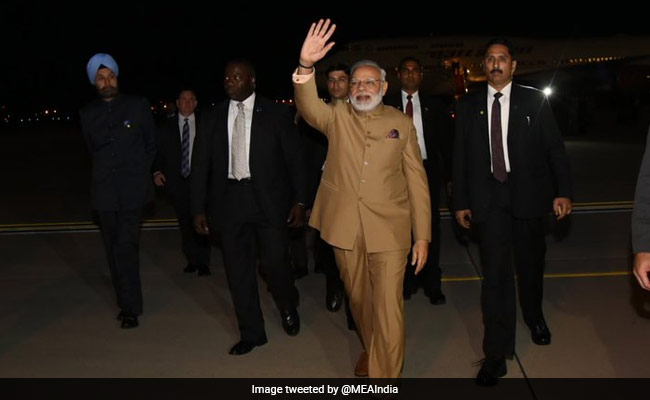 PM Modi is likely to lobby Trump on visas for technology workers during his US visit. (File)

Washington: Prime Minister Narendra Modi meets US. President Donald Trump on Monday in a White House visit that will allow the leaders to build personal rapport but is less certain to produce significant progress on issues such as immigration.

Modi is likely to lobby Trump on visas for technology workers. He's also expected to seek assurances on the Defense Technology and Trade Initiative that facilitates U.S. arms technology transfers to India. The Indian leader in a statement on Twitter after he landed in Washington thanked Trump for "the warm personal welcome. Greatly look forward to my meeting and discussions with you."

The Indian leader will attempt to advance discussions on buying 100 armed Predator drones made by California-based General Atomics, and getting U.S. help with India's plans for a nuclear-powered aircraft carrier, according to Indian defense ministry sources. Separately, a sale of unarmed patrol drones has been approved ahead of Modi's arrival, a General Atomics official said.

The two leaders may pledge deeper defense cooperation, while also discussing a harder line on Pakistan, terrorism in South Asia, and China's role in the region. A White House official who briefed reporters on condition of anonymity said that the U.S. seeks to treat India as a major defense partner, like other close allies.

Trump and Modi have spoken twice on the phone, the official said, insisting that the new president has not ignored India. Monday's meeting will help deepen Trump's strategic understanding of the country, the official said.

However, there are fundamental differences between them on issues including the H-1B visas, used by many Indian IT companies, and the Paris climate accord, which India supports and Trump has withdrawn the U.S. from.

"I would expect a brief, friendly meeting that sets the right tone, but without a lot of detail or substance," said Dhruva Jaishankar, a foreign policy fellow at Brookings India.

Despite a $66 billion trading relationship that is India's second-largest, Trump's "America First" rhetoric may make it difficult for him to find common ground with a prime minister prioritizing a parallel "Make in India" campaign. Both leaders are trying to boost domestic manufacturing in order to create jobs.

U.S. lawmakers from both parties urged Trump to push India to drop restrictions on trade and investment. "Only through concrete actions that remove actual barriers to trade and investment can the U.S.-India economic relationship flourish," according to a letter to Trump signed by House Ways and Means Committee Chairman Kevin Brady, the ranking Democrat on the committee Richard Neal, Senate Finance Committee Chairman Orrin Hatch, and the panel's top Democrat Ron Wyden.

"You've got a clash of economic nationalisms going on," said Ian Hall, acting director of the Griffith Asia Institute in Australia. "It's very hard to see Modi and Trump having much in common, other than having the desire to appear strong to domestic audiences."

Trump's other priorities, from Syria, China and Russia to domestic issues including immigration, health care and investigations into his administration, have fueled the impression among India-watchers that New Delhi is not on Trump's radar.

When India is mentioned, in relation to immigration or climate change, it's generally been negative. And Washington signaled only this past week, unofficially, that top Trump economic aide Kenneth Juster would replace former U.S. Ambassador to India Richard Verma, who stepped down before Trump's inauguration, according to the Press Trust of India.

"There is a palpable fear in New Delhi that the new U.S. president's lack of focus on India, and limited appointment of South Asia focused advisers, has resulted in India falling off the radar in Washington," wrote Eurasia Group analysts Shailesh Kumar and Sasha Riser-Kositsky in a recent note.

With Trump asking allies to shoulder more military costs, Brookings' Jaishankar suggests Modi could signal New Delhi "is willing to play a bigger security burden in its neighborhood and the Indian Ocean and is not dependent on U.S. security guarantees."

"However, contrary to India's long held desire, the U.S. will not label Pakistan a state sponsor of terror," the Eurasia analysts wrote.

While in Washington Modi is also expected to meet with Vice President Mike Pence, Defense Secretary James Mattis and Secretary of State Rex Tillerson, as well as Wilbur Ross and Steven Mnuchin, the secretaries of Commerce and Treasury, respectively.