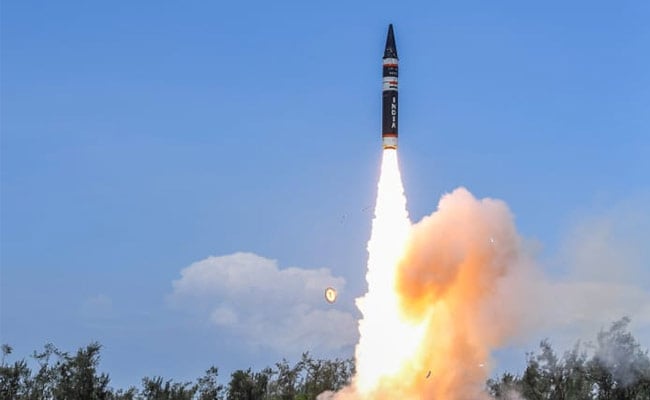 The Agni Prime is a canisterised missile with range of 1,000-2,000 kilometres

India successfully test-fired the nuclear-capable Agni Prime ballistic missile - a more advanced version of the Agni class of missiles - from a location off the Odisha coast on Monday morning.

A statement by the Defence Research and Development Organisation, or DRDO, said the successful test - which began at 10.55 am - was a "textbook launch", and took place at a testing facility on Dr APJ Abdul Kalam island, which located is around 150 km east of Bhubaneswar.

"Various telemetry and radar stations positioned along the eastern coast tracked and monitored the missile. It followed textbook trajectory... meeting all mission objectives with a high level of accuracy," the DRDO statement said.

The Agni Prime missile is a next-generation, nuclear-capable weapon made fully of a composite material, sources added. It is a canisterised missile with range of 1,000-2,000 kilometres, they said.

A total of 25 'enhanced pinaka' rockets - launched from a Multi-Barrel Rocket Launcher (MBRL) - were fired in quick succession at targets at different ranges.

An official quoted by news agency PTI said all mission objectives had been met and that the enhanced range version could destroy targets at distances up to 45 kilometres.

In March the DRDO also successfully test-fired a missile with a unique propulsion system - one based on solid fuel ducted ramjet (SFDR) technology from the ITR in Chandipur.

The DRDO said all subsystems performed as expected and that SFDR technology would it a big advantage in developing long-range air-to-air missiles.