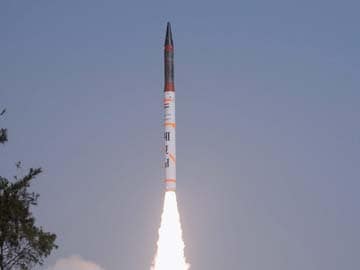 The Agni-IV is successfully launched at Wheeler Island off the coast of Odisha on January 20, 2014.

The third consecutive trial of the missile was conducted at Wheeler Island off Odisha coast at 10.52 am, DRDO said, adding the serial production of the missile would begin now.

The test fire is the last one in the series of development launches.

Propelled by composite solid fuel rocket motor technology, Agni-IV was launched from its road mobile launcher, which is also indigenously developed by DRDO.

The long range radars and electro-optical tracking systems which were located all along the coast tracked and monitored all the parameters throughout the flight.

Two ships located near the target point tracked the vehicle and witnessed the final event, a DRDO release said.

"The missile took off majestically, rose to a height of over 850 km, covered the intended range in about 20 minutes, hit the target with two digit accuracy; meeting all mission objectives and proving the capabilities of the missile," DRDO spokesman Ravi Gupta said.

Agni-I, II, III and Prithvi are already in the arsenal of the armed forces, giving a reach of over 3000 km and the country an effective deterrence capability, DRDO said.

Promoted
Listen to the latest songs, only on JioSaavn.com
"The event is of greater significance since the system was tested in its deliverable configuration with the active participation of Strategic Force Command personnel. The missile is now ready for induction and its serial production will now begin," said Chander, who is also the scientific advisor to the Defence Minister.