Agartala-Deoghar Express Flagged Off To Ease Journey Of Devotees

Mr Gohain, Union Minister of State for Railways, said in his address that the train would help devotees of Anukulchandra visit their Guru's ashram at Deoghar. 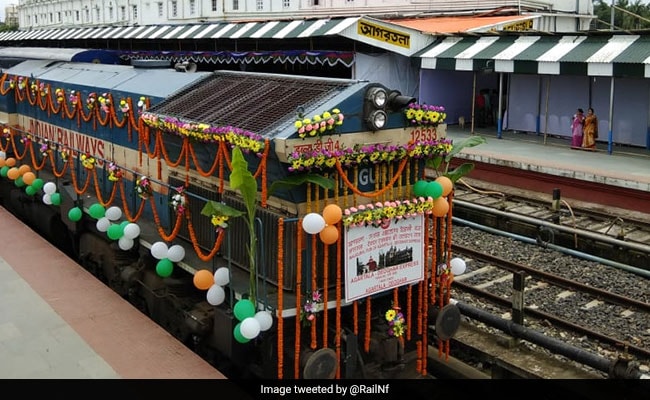 Mr Gohain, Union Minister of State for Railways, said in his address that the train would help devotees of Anukulchandra visit their Guru's ashram at Deoghar, in Jharkhand, also famous for Baidyanath temple.

Mr Gohain said the train would be proposed to be named the 'Satsang Express' after 'Satsang', the institution founded by Anukulchandra and the name of its head quarters in Deoghar.

"The new train has been flagged off on the birthday of Dr Syama Prasad Mookerjee. Nearly 3,000 devotees of Thakur Anukulchandra start for Deoghar today on the train's debut journey. People have been waiting for this service for years. The central government has fulfilled a long cherished dream of Tripura," Mr Deb said.

Introduction of the train was the pre-poll promise of the BJP in Tripura which has around 17 lakh followers of Anukulchandra, a senior Satsang leader said.

Earlier, these followers would have to reach Deoghar via Guwahati or Kolkata, he said.

Mr Gohain said the centre was working to fulfill needs of the people across the country without any "mass movement".

Mr Gohain said Tripura would emerge as the "leader of the NE" with the completion of two railway projects -Agartala-Akhaura in Bangladesh, and extension of rail track up to Sabroom in South Tripura district.

Promoted
Listen to the latest songs, only on JioSaavn.com
The 15.054 km long Agartala-Akhaura rail project in West Tripura district is expected to connect North-East Railways with Bangladesh Railways network by 2020.