After Violent Protests Against Padmaavat, Karni Sena Says It With Roses 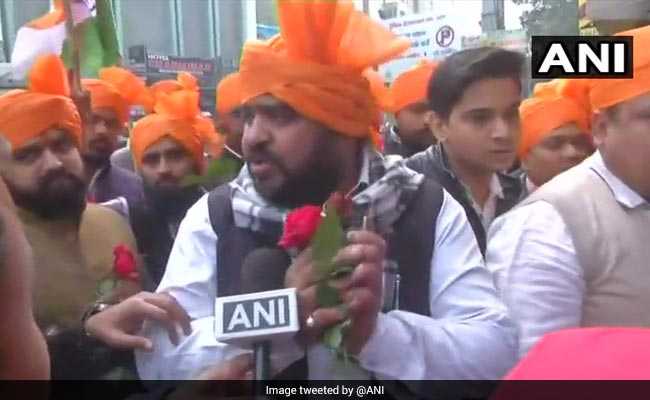 After a day of violent protests and arson across 6 states against "Padmaavat", Rajput group Karni Sena, which has been spearheading the protest, resorted to Gandhigiri outside a movie theatre in Lucknow. With distinctive orange turbans on their heads, the members were seen offering roses to movie-goers, asking them to boycott the movie. One of the members even offered to reimburse those who have already bought their tickets.

What was seen as an exercise in optics by the Rajput group, came in face of scathing criticism following an attack on a school bus in Gurgaon, the city adjacent to Delhi.The group has been called "terrorists" and "goons" by the civil society and the social media. A petition has also been filed in the Supreme Court, asking for action against it.

The protests pushed several state governments to ban the movie, which was followed by extended litigation in counts. Ahead of the release of the film after several edits and change of name, the group vowed not to allow the release "come what may".  But there has been no crackdown on them, given their political influence.

Promoted
Listen to the latest songs, only on JioSaavn.com
But reports that members of Karni Sena were responsible for the attack on a school bus, turned the tide. Cellphone videos of the schoolchildren, cowering on the floor of the bus, the seats littered with shards of glass from the broken windows, triggered outrage. Opposition leaders like Rahul Gandhi, Arvind Kejriwal and MK Stalin sharply condemned the attack. Actor and director Farhan Akhtar called the perpetrators of the attack "terrorists".

Today, the Karni Sena denied they had any hand in the incident. Its spokesperson Vijendra Singh said "Rajputs can never even think of attacking a school bus". He said it was a "plot being created by politicians, who wish to weaken our peaceful protest."

Uddhav Thackeray Appeals To PM For Help With Maratha Quota